Anaheim native Phora, whose real name is Marco Anthony Archer, continues to set new bars in the hip-hop industry. Ever since he began his career in 2010, he has founded his own record label, “Yours Truly Records“, and a clothing brand which is similarly named, “Yours Truly Clothing“.  He recently signed with Warner Bros. Records in 2017 when he released his first album, Yours Truly Forever.  Phora released his two more albums, Love Is Hell last year, and Bury Me With Dead Roses on July 26th.

Phora’s current tour took him to San Francisco where he performed at the renowned Slim’s on September 10th.  Although the doors didn’t open until 8PM, the line to get in was very long and filled with many enthusiastic fans.  As soon as Phora got on stage, the fans cheered wildly and began singing alongside him to “On My Way” while bumping to the flows at the same time. He performed a combination of songs from all three of his albums, particularly the most recent album, Bury Me With Dead Roses. One notable song that he sang was “Feel” where cellphone lights filled the audience as fans sang along with him.

Throughout the show, he spoke of his appreciation for his fans and based on the positive reaction from the fans  and his commanding stage presence, Phora has the potential to grow into one of hip-hop’s leading superstars in the near future. 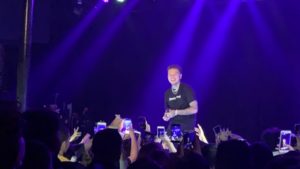