Lacuna Coil and All That Remains have been inspiring people to headbang for the past couple decades. Lacuna Coil was formed in Milan in 1994 and they’ve been entertaining metal fans from around the world.  Merging gothic imagery and music, Lacuna Coil is characterized by their mid-tempo songs featuring guitar lines with contrasting vocal harmonies provided by lead vocalists, Cristina Scabbia and Andrea Ferro. Massachusetts-based All That Remains has been highly successful since their formation in 1998, having just released their ninth studio album, Victim of the New Disease last year.

Lacuna Coil and All That Remains co-headlined the UC Theatre in Berkeley on October 2nd. The UC Theatre got electrified when Lacuna Coil, particularly Scabbia and Ferro, appeared on stage. The lightning-quick drumbeats of drummer Ryan Folden, the awesome bass playing of bassist Marco Zelati and the mesmerizing guitar riffs of guitarist Diego Cavolotti entertained the audience from beginning to end. The atmosphere ranged from feeling energetic when certain songs were played such as “Heaven’s a Lie” and “Our Truth” to gloominess when songs like “Within Me” calmed the show’s general mood. Aside from performing popular songs from past albums, Lacuna Coil also performed songs from their newest album, Black Anima, which is set to release on October 11, 2019.

When All That Remains arrived on stage, the crowd roared with excitement and shortly after lead vocalist Philip Laborite began singing, a small mosh pit formed in the excitement. Just like Lacuna Coil’s performance, All That Remains provided moments where people got pumped up and also somber moments, especially when the band began performing “What If I Was Nothing”.

Elevated by the dancing and shoving in the mosh pits and the thundering guitar riffs, the show was a great spectacle provided by two talented bands. For anyone who doesn’t know much about metal or has never been to a metal show before, it’s certainly something to be experienced in-person, as the music and positive environment make for a fun evening.

Check out the photos: 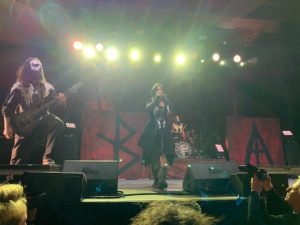 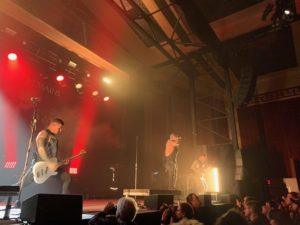