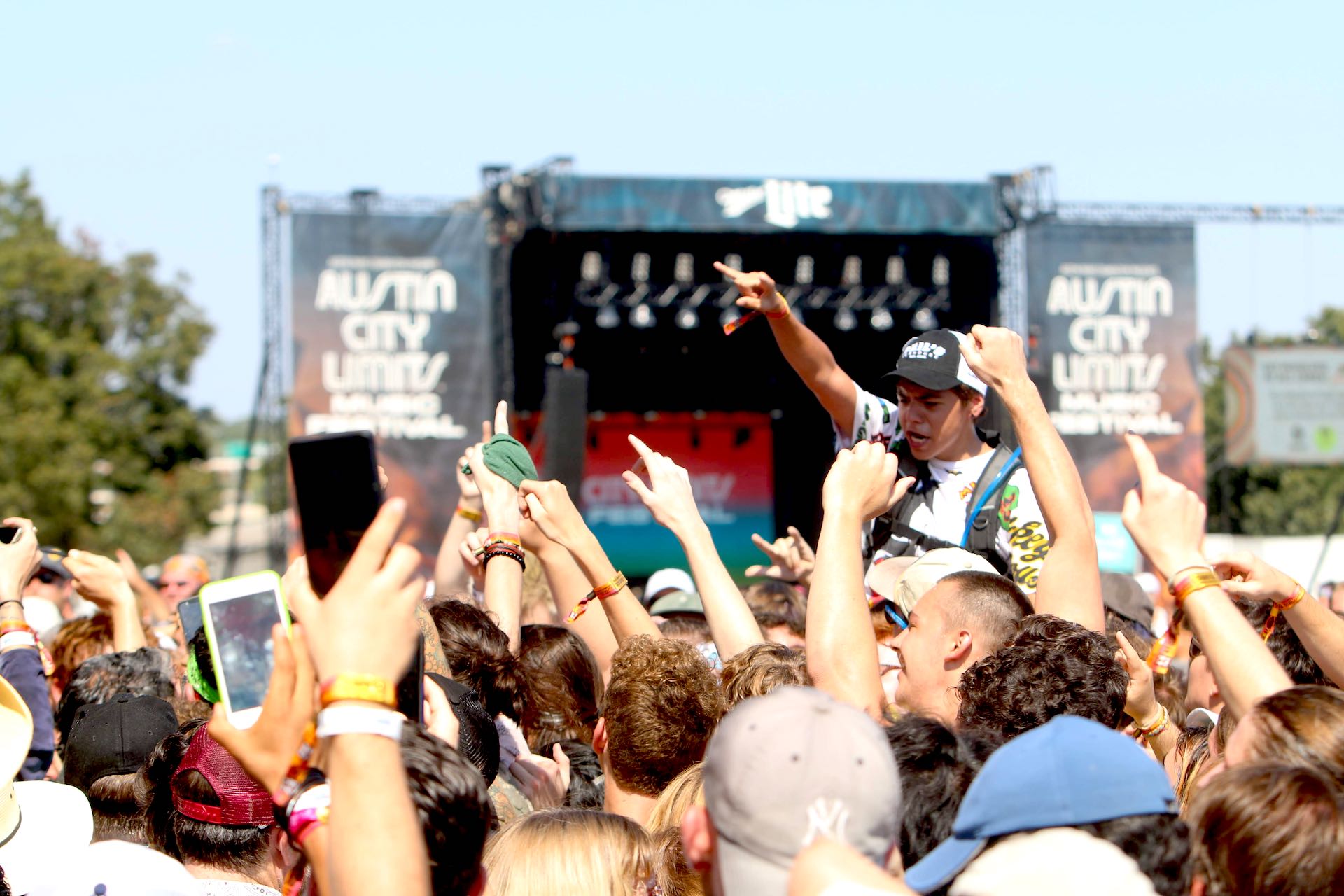 All puns aside, Austin City Limits 2019 was fire by all accounts- the artists brought the heat, the weather was scorching and music fans took advantage to step up their festival fashion. With temperatures hovering in the low to mid 90s throughout the weekend, festival organizers noted that this would be the hottest ACL Fest in its history but It didn’t prevent anyone from attending. Highly anticipated sets by Billie Eilish, Lizzo, Cardi B and Childish Gambino were overflowing with people and those between the soundboard and stage were tightly packed. Up-and-coming artists like Pink Sweat$, King Princess and IDLES were engaging and gave standout performances and early on, artists like The Japanese House, Sigrid, DUCKWRTH, Bea Miller, Still Woozy and Men I Trust brought in strong loyal fans while bringing in passers-by who stopped to take in their sets. Headliners Guns N’ Roses and The Cure not only brought in their devoted fanbase but was also a draw for the younger generation getting a musical education with their vast music catalog. Needless to say, ACL Fest 2019 was solid from start to finish.

Day One brought fans out early with exciting young artists like Oliver Tree, Scarypoolparty and Cherry Glazerr. Having recently injured himself earlier during his current tour, Oliver Tree came out in a gold-studded wheelchair to perform and it clearly didn’t inhibit his performance. The crowd was thoroughly engaged, even as he jokingly(or not) referred to the event as SXSW and performed in various outfits and hats. Scarypoolparty (Alejandro Aranda), who got a huge career boost after appearing on the music competition show, American Idol, gave a set that took fans through a rollercoaster of emotions as he was accompanied by another guitarist and bassist. As the day progressed, so did the energy brought by exciting artists like K.Flay, whose mix of rap and alternative rock elevated the heat as the huge crowd danced and jumped around during her set. TroyBoi was equally impressive with his brand of electronic sounds, highlighted by his recent single, “Do You?”, where the audience turned into one huge dance party. Speaking of dancing, King Princess took ACL Fest by storm with a solid set, accompanied by a full backing band and dancers. The audience, singing along to her songs and cheering her every dance move, were dancing to songs like “Hit The Back”, singing in unison to “1950” and “Cheap Queen”. In a trifecta of cinematic and atmospheric music, Jai Wolf, Thom Yorke Tomorrow’s Modern Boxes and Tame Impala all played back to back to back sets. With his unique take on electronic music, Jai Wolf had the crowd dancing and kept the heat up as the sun was starting to set. Meanwhile, the legendary Thom Yorke brought his latest project Thom York Tomorrow’s Modern Boxes to ACL Fest, performing material from his latest solo album, Anima. The pulsating beats that accompanied the electronic fuzz and sounds were a perfect soundtrack to the impending darkness as the sun set during the performance. Tame Impala followed up on the stage nearby and brought a perfect end to that side of the festival with their trademark psychedelic sounds and laser-heavy visuals. On the other end of the festival, Guns N’ Roses were a sight to see, as the key members of the legendary band nailed every classic GnR song. Lead singer Axl Rose was vocally strong as he has been of late, guitarist Slash was on-point with every guitar solo and original bassist Duff McKagan provided the solid foundation to every song. Ranging from the GnR classics like “Sweet Child O’ Mine”, “Welcome To the Jungle” and “November Rain”, the band also performed songs from the members other projects like “Slither” by Velvet Revolver(which Slash, Duff McKagan and original GnR drummer Matt Sorum was a part of) and “Attitude” (originally by The Misfits).

The second day of ACL Fest brought out music fans early on, many of whom were camped out at the stage where Billie Eilish was going to perform much later in the day. There was plenty of great music to catch throughout the day as her brother, FINNEAS got to showcase his talents as a performer and did not disappoint. Showing a knack for songwriting and musicianship, FINNEAS brought an engaging set alternating between the keyboard and guitar. Dancing around the stage and singing, he had the crowd with him every step of the way, especially when performing his recently released single, “Shelter”. The brothers of Kevin and Jeff Saurer, who make up Hippie Sabotage, are known for their unique live performances and they turned their set into a huge dance party mid-afternoon that was accompanied by their now trademark tossing of numerous foil-wrapped burritos into the audience. BONES UK was certainly a highlight during the late afternoon – the British duo who now live in Los Angeles had a crowd of varying ages dancing and fist-pumping to their blues-influenced electronic sounds. As the day went on, the Texas heat didn’t let up and ACL Fest most likely went up a few degrees from the enormous crowd that was tightly packed for Billie Eilish to perform. This year’s breakout artist busted out on stage to her number one single, “Bad Guy” and had the entire audience jumping with cellphones in their hands. It was a sight to see as the 17 year-old commanded the audience with every note, who were more than willing to bounce around when she asked them to. Coming into the crowd during the ballad, “Ocean Eyes”, Eilish brought a huge surge of fans trying to get a glimpse while singing and walking along, stopping intermittently for a selfie. On the very same stage about an hour later, the legendary modern rock band The Cure ushered in the Texas night with a two-hour set of their classics of gloomy sounds. Classics ranging from “Pictures of You”, “Just Like Heaven”, “Lovesong” and “Friday I’m In Love” were highlights for many fans, who interestingly were accompanied by their kids, who were jumping to Billie Eilish songs just hours prior. Originally scheduled to perform last year but cancelled last minute due to a foot injury, Childish Gambino(aka Donald Glover), triumphantly returned to ACL Fest. Glover made note of last year’s incident while expressing gratitude and appreciation of the fans who came to see him this year. He opened his set as he has in past festivals, describing his performance as “his church” and to take in the moment, in which fans certainly were more than willing to do. Tightly packed up-front, fans were swaying, dancing and cheering loudly during staples like “3005”, “Crawl” and the recently released “This is America” and “Redbone”. Glover took in the moment as well, as he ventured into the crowd numerous times for selfies and found a fan with some bud to smoke from.

For some festival attendees, the last day is usually a day to recover from the madness of the first two, but there was no letting up for day three of ACL Fest. DUCKWRTH made sure of that, as the hip-hop act had a crowd ready and eager to dance, jump and sing along. Not as wild, Still Woozy had fun electronic vibes that eased festival goers into the dancing mood. On the flip-side, IDLES represented rock music well early in the day. The British punk band had a mosh pit form early on in their set that got rowdier and rowdier, encouraging guitarist Lee Kiernan to jump into the crowd and join in. Lead singer Joe Talbot took many opportunities to comment on numerous social issues ranging from immigration to healthcare, which drew cheers from the audience. Taking fans into an escapism, Bea Miller was energetic and fun to watch, despite some technical issues. Her set, highlighted by familiar songs, “Fire N Gold” and “yes girl” was solid and filled with entertaining banter in between songs. As BANKS took the stage for her set, there was a surge of fans flocking to see her. Mostly accompanied by two dancers, BANKS exuded focus while she moved in unison and strong vocals, especially during “Waiting Game”, “Begging For Thread” and got the crowd dancing and clapping during “Drowning”. Bringing the nostalgia to the final day of ACL Fest was Third Eye Blind, who achieved great success in the late 90s. Their set was tight and predominantly filled with the classics that had fans singing in unison- “How’s it Gonna Be?”, “Graduate”, “Jumper” and of course, “Semi-Charmed Life”. Anticipation was growing for the final sets of the night, especially for Lizzo and Cardi B. 2019 has certainly been a banner year for Lizzo, who released her album Cuz I Love You earlier this year and the song “Truth Hurts” has been on the top of the singles charts for over a month and a half. It was a triumphant return to ACL Fest Fest for Lizzo, whose performance on the larger Honda Stage on a Sunday afternoon three years ago was nowhere near the record crowds that she drew this time. In fact, the audience for her set extended well into the nearby stage where Cardi B was set to perform later in the evening. It was a gratifying moment for the artist who grew up in nearby Houston while honing her craft as she took a moment to say, “Everyone in the world told me I wasn’t going to be able to do s- with my life. And now look!” Fans of all ages were at her set that included her loyal fanbase known as “Lizzbians”, there to see her perform the familiar songs like “Juice” and “Good as Hell”. Nearly thirty minutes late for her set and after fans booed impatiently at the delay, Cardi B emerged on stage to vociferous cheers and proceeded to put on a show. Accompanied by dancers, stage visuals and props, the outspoken rapper tore through familiar songs like “Money”, “Press” and “I Like It”. Though she was late, Cardi B still performed for almost an hour, which was what she was scheduled to perform, and exceeded expectations on-stage. The same could be said for standbys, Mumford & Sons, who closed out the festival three years ago. The British band acknowledged their numerous performances in Austin, calling the city “dangerously like home”. Outfitted with a catwalk to perform some acoustic numbers, Mumford & Sons still exude that innocent charm and humbleness of a younger band. They performed the familiar songs like “Little Lon Man”, “The Cave” and more recent hits like “Beloved” and “Believe” that got the crowd foot-stomping, dancing and clapping along. Attended by an audience filled with both younger and older fans, Mumford & Sons closed out ACL Fest with smiling faces that were overwhelming reciprocated by a most hospitable Austin audience.

This year’s ACL Fest was truly highlighted by the female performers, led by Billie Eilish, Lizzo, Cardi B and Kacey Musgraves. There was lots of support by emerging artists that got their time to shine with King Princess, BANKS, Sigrid, The Japanese House and K.Flay impressing a wide array of audiences. With a balance of these artists and the big name headliners accompanied by the Texas warmth (both weather-wise and in hospitality), Austin City Limits is an event that has truly come into its own and has become a destination as a premier international festival that cannot be missed.