SPOTLIGHT: The Ever-Evolving Hairstyles of Matty Healy From The 1975

The 1975 frontman Matty Healy turns thirty-one years old today and we honor not only his longevity and success in music but the evolution of his hairstyles that have made him unique and appealing to an adoring fanbase.  From multiple colors to various lengths, Healy has a penchant for reinvention when it comes to his appearance.  Whether he’s in a beanie wearing a cardigan and skinny jeans or t-shirt and leather jacket, there’s always been an accompanying hairstyle that’s made for the perfect image.  Let’s take a look of the many hairstyles for the one and only Matty Healy.

Although The 1975 have been around since 2002, they released their self-titled debut in 2013 which Healy successfully sports a double-side shaved look with a long middle patch of hair. A style that screams indie-rocker.

Flash forward to 2016, The 1975 dropped their pop-driven sophomore album I Like It When You Sleep for You Are So Beautiful yet So Unaware of It and the sound isn’t the only thing different. Healy flaunts his rich curls for the next two years.

By 2018, their third album A Brief Inquiry into Online Relationships is out and again Healy changes his hair not just once, but a few more times with vibrant colors. The first single off the album “Give Yourself A Try” shows off a bright carrot-top look.

Their next single “TooTimeTooTimeTooTime” and “Love It If We Made It” highlights Healy’s new bleached blonde hair-do.

Healy dyes his hair again to an aqua blue matching his labelmate No Rome in his song “Narcissist”. 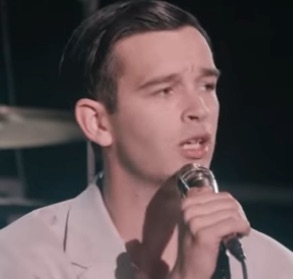 The last single “It’s Not Living (If It’s Not With You)”, which the video was inspired by Talking Heads’ Stop Making Sense, has Healy replicating David Byrne’s image with a short- combed back hair.

Off their upcoming fourth studio album, Notes on a Conditional Form (May 2020), The 1975 released their first single “People” which is arguably their darkest, edgy and angsty sound yet. Not to mention, Healy seemingly looks towards a mix of Ozzy Osbourne and Marilyn Manson for his appearance.

It seems with every new album of The 1975, there are new sounds introduced, new perspectives in the songwriting and all the while, Matty Healy finds hairstyles to accompany the sentiment of the music.  We look forward to the next era in hairstyle that Healy will go through next.  Now, which hairstyle do you like on Mr. Matty Healy?