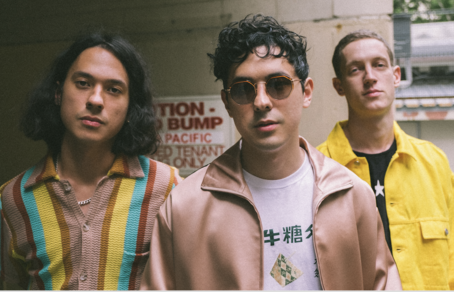 Last Dinosaurs has dropped a new infectious 90s nu-disco bop “Flying” in a new video that was released simultaneously.  The accompanying video features Lachlan Caskey on lead vocals while brother Sean is jamming with the guitar and bassist Michael Sloane is dancing to the song.  The video shows the guys at a party while everyone is on their phones, a common observation in today’s social media-addicted world.  Caskey begs, “Look me in the eye, girl — cuz you’re always looking at your phone”.  In the current time of social distancing with everyone glued to their phones more than ever, the song and video represent a time of large gatherings that many now long for.  Early on in the song, the Caskey brothers sing a few verses in Spanish, “Honey, no te preocupes…Cielo, no pienses a futuro”, meaning “don’t worry honey, don’t think ahead. ”  Speaking about the song, Lachlan stated the song was inspired by a recent European trip – “I had to either be wallowing in loneliness, or enjoying the freedoms, let’s say, of a single young man.  My friend from Spain, about 12 years my senior whom I consider to be a brother, was responsible to helping me capitalise on this time, and for a period of about 6 months took me out every Friday to, admittedly, tacky clubs and s**house bars.  This formative period of going to euro-dance clubs and trying my luck got me vibing on Nu-Disco again. “Flying” is the second single to be released post-Yumeno Garden album.