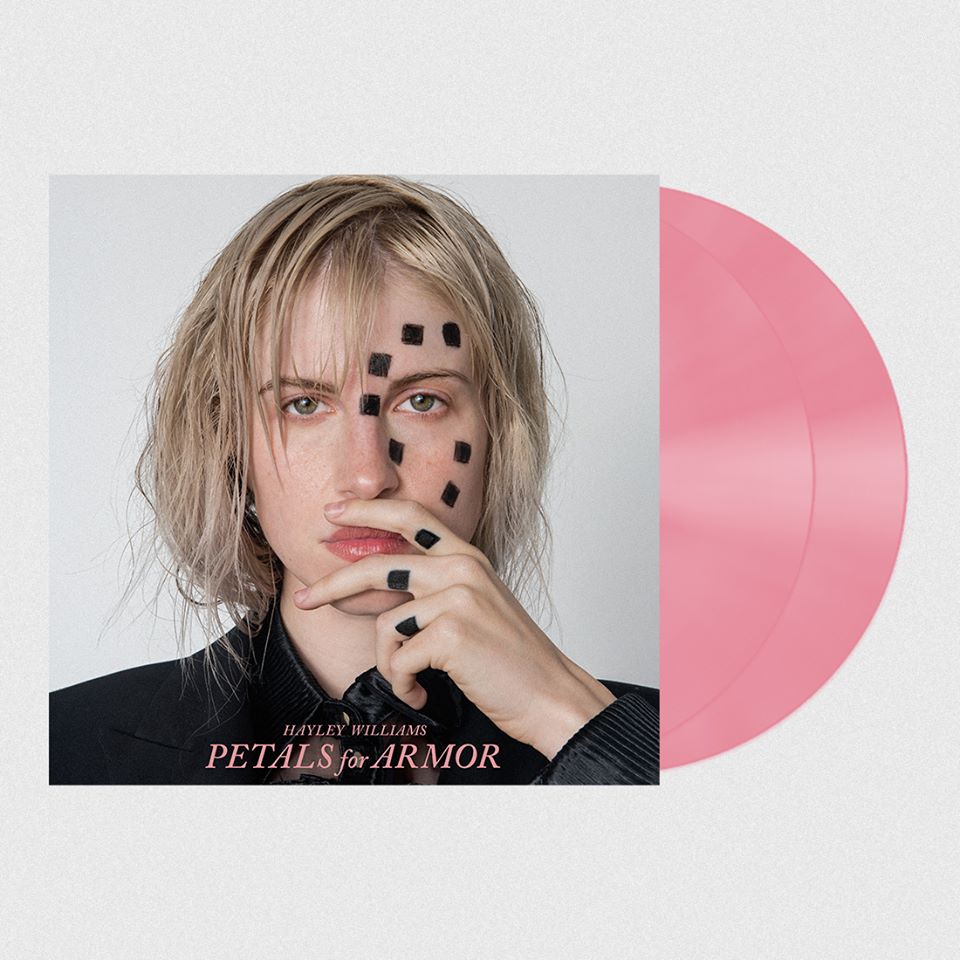 The debut album from Hayley Williams titled ‘Petals for Armor’ (Atlantic Records) just dropped and it successfully captures her rawness and vulnerabilities. Ever since the release of the album’s first single “Simmer” at the beginning of the year, the hype and anticipation have been growing for a fanbase that’s followed Williams throughout her nearly sixteen-year career from her days in the pop-punk band, Paramore. Petals for Armor is stylistically different than any Paramore record the subject matter reflective of struggling to achieve a successful relationship and the ultimate realizations that lead to hope and personal triumph. The fifteen-track album is predominantly synth/percussion driven with jazzy art-pop tones and spoken word but it’s Williams’ vocals that stand out.

‘Petals for Armor’ serves as a document of the thoughts and feelings Williams has gone through during key moments in her life, notably her previous marriage with New Found Glory guitarist Chad Gilbert. The couple were together for ten years but only married for only a little more than a year. The divorce led to massive depression for Williams and a stint in rehab, as the experience brought up a reckoning of her own parents’ divorce. Songs like “Creepin”, “Dead Horse”, and “Why We Ever” detail those thoughts from her marriage, as in “Dead Horse” where she references how she stayed too long in the marriage during the cheery upbeat track- “I beat it like a dead horse. I beat it like a drum. Oh, I stayed with you too long”. Another vulnerable moment on the album, “Leave It Alone” deals with personal grief Williams suffered brought on when her grandmother experienced a bad fall that left her traumatized and struggling with losing people.

Themes of anxiety, shame, disconnection, and mental health issues arise on ‘Petals for Armor’, however, the last half of the album finds resolution, hope, and starting a fresh new life like in “Crystal Clear”. This isn’t all sadness and insecurity, as more cheery bubbly uplifting songs off the album include “Cinnamon”, where Williams sings- “I’m not lonely. I am free”. In “Pure Love”, Williams sings “If I want pure love. Must stop acting so tough. I give a little, you give a little”, representing to find peace with herself and overcoming intimacy. Her two songs “Sudden Desire” and “Watch Me While I Bloom” maybe the closest sounding to her Paramore roots as Williams unleashes her bottled up anger and frustration into something empowering. The song “Roses/Lotus/Violet/Iris” really sums up the album ‘Petals for Armor’ featuring supergroup boygenius (Phoebe Bridgers, Lucy Dacus, and Julien Baker) on backing vocals is a feminist-themed song where Williams is metaphorically a garden who has re-blossomed after wilting. With all the highs and lows Williams experienced throughout her twenties, ‘Petals for Armor’ tackles the dark moments in her life with a certain intimacy that carries through the songs of hope and self-love. The album is an impressive debut that may have challenged Williams creatively and artistically but keeps us eager to see her succeed on her journey for happiness.