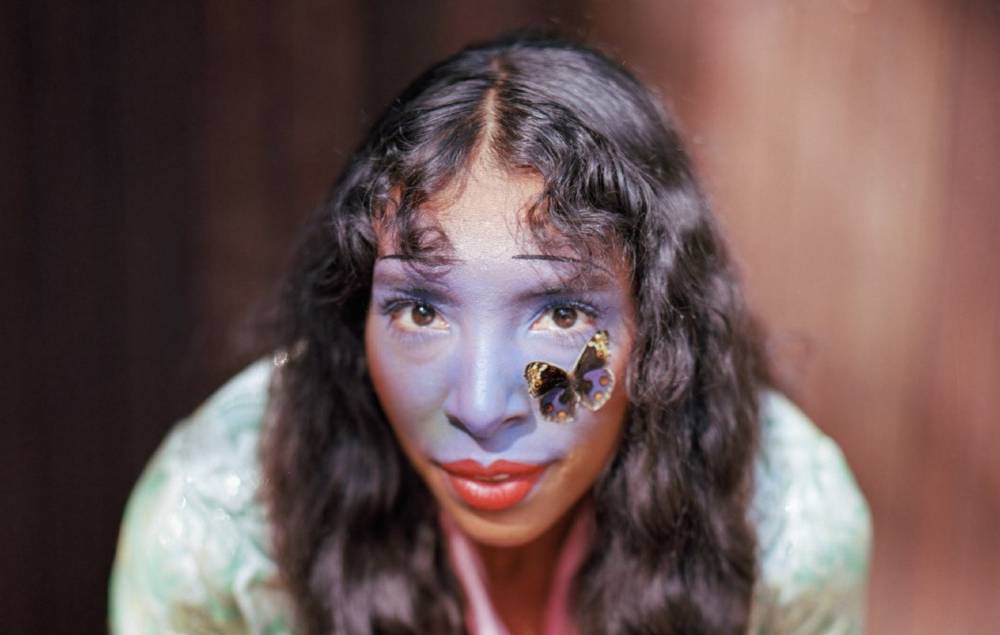 Experimental pop has always been a genre that has fascinated me, mixing the conventional with the far-out, the familiar with the peculiar. In my opinion, the best experimental pop music pushes the limits of what we dare to consider “pop” music, with all of its semantic and cultural baggage. Artists like Kate Bush and Björk paved the way for a new generation of creatives, who use the formulaic structure of traditional pop music to execute some of the most ambitious sonic landscapes ever created. SPELLLING is one of these descendants.

SPELLLING, aka Oakland-based musician/artist Tia Cabral, has built a musical career masterfully intertwining electronica, soul, and pop. Her previous two albums ‘Mazy Fly’ (2019) and ‘Pantheon of Me’ (2017) leaned on a strong foundation of swirling synths as SPELLLING crafted her fairytale-like vignettes. ‘The Turning Wheel’ is a new endeavor for SPELLLING, enlisting a full-scale orchestra to provide the base for her epic. What results is an album that feels profoundly grounded; whereas SPELLLING’s previous albums felt like she was soaring into the heavens, ‘The Turning Wheel’ puts Cabral’s feet firmly on the ground where she can let her roots grow.

There’s something profoundly theatrical about this record. The orchestration, such as on the track “Emperor with an Egg”, coax the listener into a mystical world where, “He’s a bird, he’s a king, He can swim with his wings, Like an arrow”. The fantastical lyricism lends itself to these grand, trotting orchestral breaks SPELLLING peppers throughout the record. The opening track “Little Deer” feels like sitting at the feet of a grand stage, and as SPELLLING’s incoming voice haunts the air, there’s the distinct thrill of waiting for the oracle to appear. As you move through the album, it feels as though you are a child turning the pages of a story book, where the plot is sometimes lost, but you sit there transfixed by the magical images in front of you. Moving into the second half of the record, marked by the sprawling opus “Boys at School”, the story gets darker, with an element of danger creeping in on the subsequent tracks “Legacy” and “Queen of Wands”.  The tension in these songs provide the structure for the dramatic arc of ‘The Turning Wheel’, which reaches its literary climax on “Revolution”. A twinkling piano feels like emerging from a dense forest, and Cabral’s gentle voice grows deeper as she realizes that it is time to grow up and join the “permanent revolution”.

Cabral’s voice is the true star of ‘The Turning Wheel’. Whereas SPELLLING frequently made vocals her plaything on her previous two albums, chopping and pulling them apart like a skilled chef, her voice is much more central to the ethos of this album. Her vocals are remarkably crisp, with an uncanny ability for storytelling merely through tone and delivery. Cabral’s voice feels like a tour of her influences, from Kate Bush to chamber-pop to pure soul. It’s truly a treat to have her as the narrator guiding us through the world she’s built, trying on different hats as we move through the grand, the lush, and occasionally the ominous.

I once read an interview with Haley Dahl, aka Sloppy Jane, where she gave a list of her unsolicited advice. The one that has always stuck with me is #12: “How to know if your art is good: if a child wouldn’t like it, it is bad.” The reason ‘The Turning Wheel’ has endeared me so much is not only because of its experimentation and careful orchestration, but because it maintains a complete sense of playfulness. With many experimental pop records, listeners may be turned off because it requires a “refined” musical palate, or who am I kidding, an acquired taste, to truly enjoy. But I can imagine a child listening to this album and being instilled with the same sense of wonder I felt. There’s something to be said about the kind of artist who can command the respect of some of the harshest critics and the awe of our inner child simultaneously. That is the true triumph of ‘The Turning Wheel’.