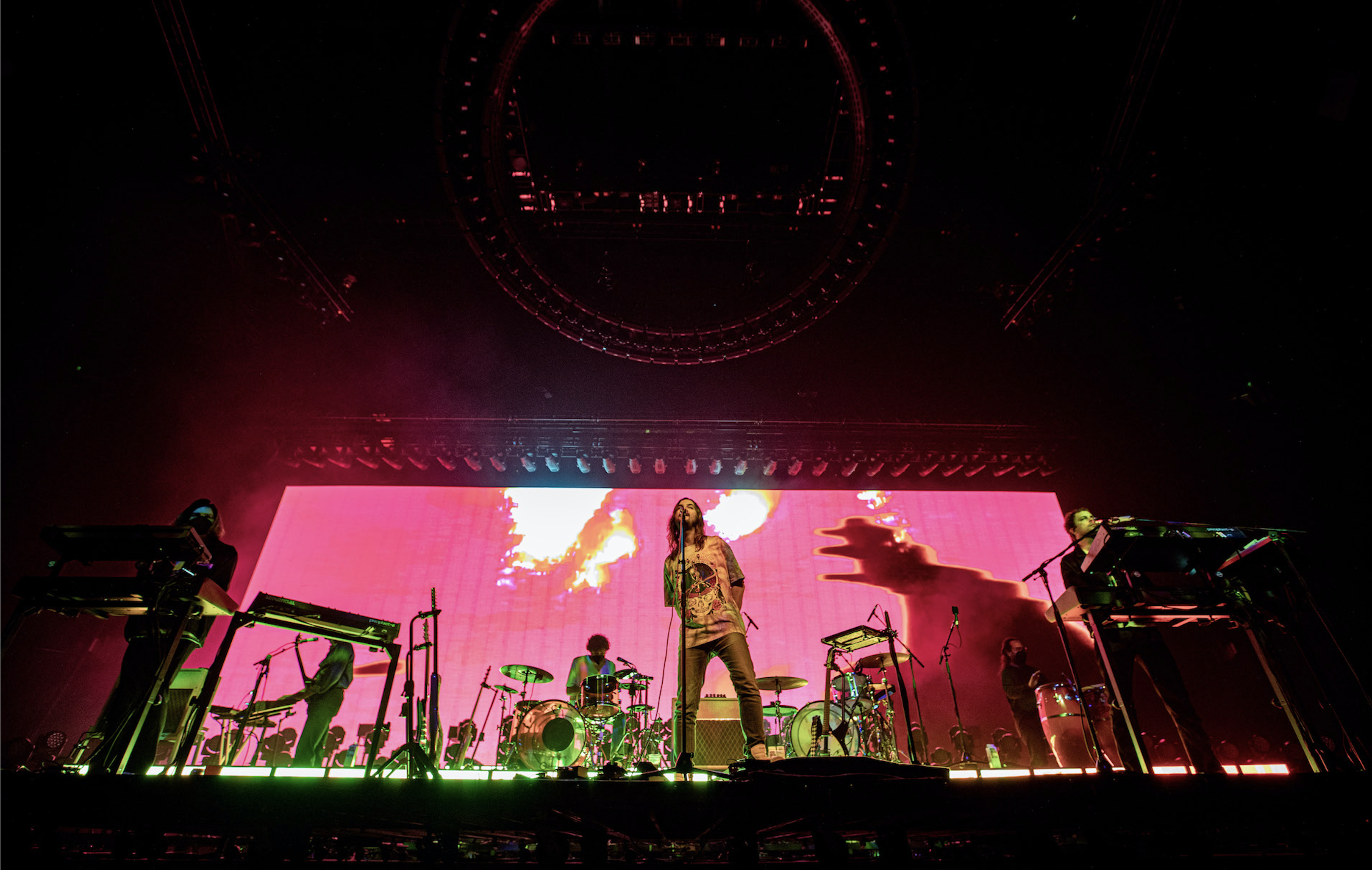 Tame Impala returned to San Francisco at the Chase Center September 15th for their fourth live show in the U.S. since tour schedules were put on pause due to the pandemic. ‘The Slow Rush Tour’ was originally supposed to kick off in early 2020 in support of their latest album, ‘The Slow Rush’ so it was much more rewarding for the audience as they had a little over a year to get familiar with all the songs. The crowd trickled in early as lines were slower than usual due to proof of Covid vaccination or a negative test for the virus as per city mandates. Once inside, the crowds were seen wearing masks, which were also required and thankfully, no incidents related to any contrarians took place. What transpired was an overwhelming joyous and communal night of pure unity brought together by the music of Tame Impala.

Opener Sudan Archives performed to a sizable crowd that kept growing throughout her set. The Los Angeles-based singer and violinist captivated the audience with her flair and energy that was highlighted by songs like “Come Meh Way” and “Not For Sale.” Born Brittney Parks and performing as Sudan Archives, the music fuses elements of of hip-hop and R&B with Sudanese and Ghanaian traditions that proved to be an entertaining set.

After a pre-recorded video of a doctor speaking about the effects of ‘Rushium’ and its mind-altering effects that got increasingly distorted, Tame Impala took the stage to a raucous crowd. The band’s founder, Kevin Parker showed a moment of gratitude as he bowed to the crowd to say hello and thank them for coming out before starting into “One More Year,” followed by “Borderline,” both from ‘The Slow Rush.’ The background visuals were stunning as various psychedelic colored images appeared accompanied by numerous spotlights that were on-stage. Things kicked up a notch when they played their cover of “Skeletons” by Travis Scott followed by “Elephant,” the latter from their 2012 release, ‘Lonerism’ and a staple of their shows since their early days. “Apocalypse Dreams” followed with visuals emitting a huge ocean wave and at one point during the song, a UFO-like light structure lowered with the LEDs projecting a spinning motion. The song ended with a huge laser light show and gave the band a moment to leave the stage for an intermission. The party continued as they started the second half of the set with “Gossip” and “Let it Happen,” that kept the already crowd, who was standing during the whole show, to dance and sing along. More than any of the band’s previous tours, Parker really embraced the role as the face of Tame Impala, as he took moments during the set to address the crowd, shouting out to San Francisco and the beauty of the city. He also spoke about how he became a father during the last year to his daughter named Peach and noted that she was at the venue. Towards the end of the show, Parker walked to both sides of the stage clapping and thanking the crowd for coming while also noting the numerous signs that fans were holding up with pictures of him before the band launched into “The Less I know the Better.” The night ended with “One More Hour,” which many would have loved to with their favorite band and capped off a triumphant return of live music at San Francisco’s biggest arena.