As it gets closer to the return to the desert for Coachella 2022, details about the afterparties are being released, including a set of different events produced by electronic promoter Framework. With a unique event each day, Framework is leaning on its experience with their work on Coachella’s Yuma tent to numerous events in California, Las Vegas, Bali, Mexico and others, some of which they’ll be bringing to the desert for the weekend.

Rebecca Black will host the Friday event that brings the renowned A Club Called Rhonda to the desert for what’s dubbed ‘Rhonda Queen of the Desert’. The night will feature disco sounds from Purple Disco Machine, who has gone on to feature in Mark Ronson’s ‘Love Lockdown’ live mix alongside industry heavyweights, Dua Lipa, Miley Cyrus, Tame Impala, Black Madonna, and Peggy Gou. SG Lewis and Jayda G will also perform during the event.

Saturday will bring the recently launched Palm Springs Desert Air concept to the Coachella environment, showcasing a variety of sounds from house and techno. Ibiza heavyweights The Martinez Brothers will perform back to back for the first time ever with Black Coffee while South Korean DJ and record producer, Peggy Gou will bring on the deep house sounds.

On the final night, the popular Vegas event, Wynn’s Art of the Wild will host a rare back to back performance from Damian Lazarus and the rapidly ascendant Michael Bibi, a set from Dixon, and Leyla Benitez.

Each event kicks off at 10p and goes until “late” at Ross Aviation in the Thermal Airport, which is near the Empire Polo Field and tickets are on sale now. 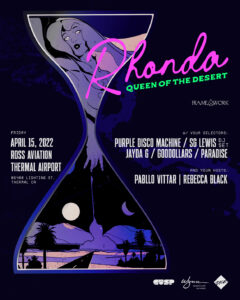 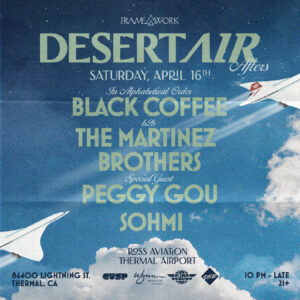