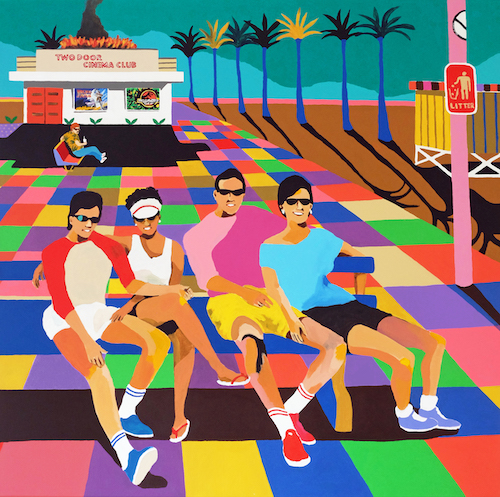 Although the summer is coming to an end, the season’s upbeat and happy vibes are here to stay with the fifth album by Two Door Cinema ClubKeep On Smiling, released on September 2, 2022, under Glassnote Records. Northern Ireland-born trio Alex Trimble (vocals, guitar, synth), Sam Halliday (guitar, vocals), and Kevin Baird (bass, synth, vocals) formed the band in 2007 and deliver a cohesive 12-track album filled with lively and upbeat songs that reflect on a sense of gratitude and awareness of how quickly time can pass in a blink of an eye.

Keep On Smiling opens with an instrumental, synth adventure in “Messenger AD (Intro)”, a futuristic-sounding song that feels like the beginning of a dystopia movie. “Blue Light” follows, its summer-y guitar and consistent beat setting the tone for the rest of the album’s chill, happy theme.

The fourth track, “Lucky”, strays from the positive attitude for a couple minutes to express the band’s feelings on the fast-changing world of pop culture. Released as the second single to tease the album, the song focuses on how trends come and go before you even have time to process them. It’s a personal piece, one that stems from the band’s success of their debut album Tourist History which is highly regarded as representative of 2010s indie rock. “We’re running out of luck/ I can feel the change/ Holding onto little pieces of what remains/ And was it not enough?”

We return back to the beachy feel of the album in the fifth track “Little Piggy”, a summer montage song perfect for a sunny day. The following song, “Millionaire”, proves that Two Door Cinema Club isn’t rooted in their rock upbringing as they start the song with similar futuristic sounds seen in “Messenger AD (Intro)”, before picking up the pace to something reminiscent of 80s disco. The piece is eclectic and fun, capturing hints of EDM and house in the new genre.

The first single the band released is the eighth track on the album “Wonderful Life”. It’s a nod back to Two Door Cinema Club’s classic indie rock roots: a guitar-heavy, rock-able song about appreciating the life you have. “But it’s a sin that I can’t understand what you meant/ And I’m sorry that I can’t get through/ But if we choose to forget what we’ve come to regret/ Oh, if only we knew”. While the beat of the song is definitely more coming-of-age, the lyrics are simple, impactful, and ultimately a reminder to “take back your wonderful life.”

“Feeling Strange” and “Won’t Do Nothing”, the ninth and tenth songs on Keep On Smiling, continue the band’s experimentation with more disco-like sounds, especially with their robotic and funky undertones that separate this album from their past four. The album closes with “Disappear”, a bass-leading song with elements of cinematic synth and orchestral glory. With Two Door Cinema Club’s past planted in indie rock, it’s refreshing to see them step out of their comfort zones to create a groovy collection of cool songs and good vibes, a lasting reminder to keep on smiling.

The band is going on tour in North America and Europe to perform their new album to those looking for a good time and good music.