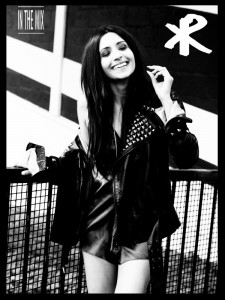 DJ Kayper is the stage name for Kaajal Bakrania, a DJ and Radio Presenter from the UK whose garnered accolades from peers and fans worldwide. Kayper started DJing at a young age with tape decks and proceeded to participate in numerous competitions while honing her skills. As her reputation began to grow, DJ Kayper was invited by BBC Radio to host her own mix show, which she hosted for six years having left in 2012.

B-Sides caught up with DJ Kayper while at Coachella 2013 to see what she’s been up to since leaving radio, her future plans and more.

You spent a bit of time in radio presenting and playing a diverse range of music for an immediate accessible large audience. What was the catalyst for leaving radio?

DJ Kayper: I guess the main reason why I want to leave I was doing it for six and half years and it got to the point where like, I was not able to do certain things like go on tour at certain times when I wanted to I just thought it was a good time for me to kind of leave and also I make music as well and I was not able to make music and do my radio show at the same time I had to leave one of them so it had be the show. But yeah, it was a good experience and I’m glad I did it and I’m sure I’ll go back to radio at some point.

Would you be interested in doing podcasts at some point in the future?

DJ Kayper: I’ve been offered, you know from a lot of people that do podcasts like Diesel and Red Bull and stuff, but at the moment I just want to concentrate on making music and getting it out there and not just kind of making music and having it at home and not letting people hear it, so that’s my main priority at the moment is to make music.

What aspects of performing live have been the most rewarding?

DJ Kayper: I guess the most rewarding thing is the reason why I still do this which is because I just love to see people have a good time and dance. I guess that’s when you can see everybody enjoy themselves, hands in the air going crazy, that’s the best feeling for me cause I’m not a party girl. I don’t go out and party I would rather be behind the decks making other people party so for me it’s like the ideal situation make people dance let them have fun and it makes me happy that everyone is happy.

You taught yourself to DJ using tape decks and performed in numerous competitions when starting out. As DJ software and hardware advances technologically and commercially, what aspects of the next generation of DJs would you like for them to retain from the current and past generations?

DJ Kayper: I would like to see a person continue to use turntables that’s the main thing. I would like to say I’m a purist but I’m not. I did collect records for very long time and you know, with turntables I feel like visually they look better than CDs or just sitting there on your laptop. So, I would just like to see more people using turntables, but obviously you know that’s not the way technology is going and it’s totally fine if people are using whatever CDs laptop Abelton or whatever. Me personally, I just like to use turntables and I like to let people visually see that I’m still keeping that little bit of rawness from back in the day.

Your work has been highly lauded by noted veterans and rewarded by critics alike. Having achieved these accolades and created relationships with numerous people, what other goals do you have yet to conquer?

DJ Kayper: I guess the main goal is putting music out, that’s my main thing. I’ve gotten past the stage where I just want to be a DJ, I want to DJ as an artist and not just to DJ, that’s my main focus at the moment my main goal.

Are there collaborations in the works?

DJ Kayper: I’m working with, umm a few producers I’m not going to say to be honest. (laughing) I’m going to keep it a secret but you will find out sooner or later.

Outside of music and performing, what other activities keep you busy and inspired?

DJ Kayper: I don’t really get to do much to be honest because I’m always working but if I ever get that one or two days off I’ll just chill with my friends, cook and may be like watch films, but nothing that involves partying. That’s the last thing I want to do on my days off; definitely just chilling out.

If you had a time machine where would go and what would you do?

DJ Kayper: I would go back to probably the 70s and 80s when disco was around. I would go to Studio 54 and see the Time perform. I would go see Prince in his heyday, see Janet Jackson on her Rhythm Nation tour. I actually was thinking about this the other day what would I do if I was born 20 or 30 years earlier those are the things I would love to go and do.