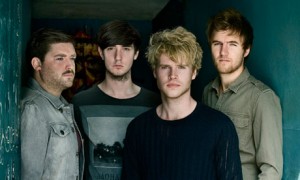 Dublin based band Kodaline recently released music video part 2 for their latest single “All I Want”, from their new album “In a Perfect World”, which will be released on October 8th. I’ve been a fan of Kodaline for a while now and after seeing them at ACL this past weekend I’m even more excited to hear more.

This song is a tearjerker about the feeling of being lost after the end of a relationship and just wanting someone to love and accept you for who you are.

All I Want (part one)  is a beauty and the beast style tale about a man who just wants to fit in and feel loved. The man’s face is disfigured and he is treated like a monster by his fellow co-workers, being mocked and mentally abused, with only his dog Digby to care for him. All the while he is in love with a beautiful female co-worker and in the end he finally wins her heart after rescuing her from other employees harassing her.

While the first music video was based more around him getting the girl, All I Want (part two) is based around his dog. By accident the dog gets out while the man is leaving for work and doesn’t realize it until he gets home. With the girl’s help and many flyers he finally finds Digby and brings him home where the woman is waiting to hear news of his whereabouts. Now with his dog and the girl he loves it seems he has everything.

As in the end of part 1, in part 2 it shows he has left his bag where he found Digby. Could there be a part 3 coming up sometime soon? I certainly hope so. These videos will have you in tears by the end of it, and can we really have too many videos like that?