In a time when movie soundtracks no longer dominate radio waves the way they did in yesteryear, the original motion picture soundtrack from Frozen has stayed in the top 10 on iTunes more or less since it was released. It’s hard to say if Disney’s newest fairytale marks the opening of a new era. However, we thought this would be a good time to take a look back at some of the best music to ever be placed in the background of films.

The Shins owe a lot to this record. If it wasn’t for Zach Braff’s directorial opus there’s no telling where they’d be right now. This movie introduced the world to “New Slang” in a big way. However Colin Hay, Coldplay, and Simon & Garfunkel also lent their own dulcet tones to the soundtrack. Soft ambient music lent itself well to the vulnerable yet lovely tone of the movie. 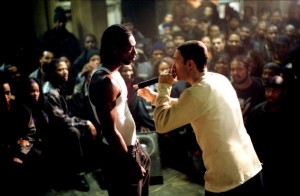 Eminem was largely known as a controversial funny-man before his 2002 film. 8 Mile was his introduction as a serious artist to the mainstream. “Lose Yourself” can fairly be called a modern classic. The dark, somewhat hopeless mood of the film is captured perfectly through that song. The tracks from 50 Cent, Jay-Z, Macy Gray, and others didn’t hurt either . The bleak hip-hop and R&B are perfect for Slim’s acting debut.

This is the rare film where it seems that the music was more important than the story. Sparse dialogue and steady pacing frame the ambient pop music perfectly. “A Real Hero” by College is the focal point of this 80’s style soundtrack. Synth reigns in the Ryan Gossling vehicle. While some have called the movie unsatisfying, the music makes it worth the price of admission.

7.) Where The Wild Things Are

Karen O took a short break from fronting Yeah Yeah Yeahs to lead a children’s chorus for the soundtrack of this classic children’s book adaptation. While “All is Love” was released as the single there are other gems hidden in this endearing album. “Cliffs,” and Carter Burwell’s short but sweet “Lost Fur” lend to the record’s innocent yet fascinating vibe.

The nostalgia in this movie’s music is only rivaled by Forest Gump. Remember The Titans soundtrack feels less forced than Gump, however. The song choices in this one are organic and lend beautifully to the story. Marvin Gaye, Creedence Clearwater Revival, James Taylor and Cat Stevens are among the legends included. There’s something refreshing in hearing these old songs together. Even though it’s your grandparents music, their combination still gives the sensation of seeing an old friend in a new hairdo. Aside from the natural way it blends into the movie, this soundtrack breathes new life into classics that could have otherwise felt dusty.

Michael Cera and Kat Dennings have undeniable chemistry in this love-letter to the indie music industry. Vampire Weekend, Bishop Allen, and Band of Horses are all made their way onto the Playlist. The vibrant nightlife of mid 2000’s Manhattan is seen through teenage eyes and sets the stage perfectly for fantastic music. Even the most dedicated audiophile is likely to find something new on the Nick and Norah album. For something off the beaten path, we suggest “After Hours” by We Are Scientists. Not only is that a great song but it sums up the movie precisely. Watch the video here.

4.)Beauty and The Beast

Apologies to Frozen but this is the best Disney soundtrack. Soulful and deep, the Prologue sets up the movie in a somber fashion. While it is a children’s movie there is a darkness in it that bleeds into the soundtrack.”Beauty and the Beast” as well as “Be Our Guest” are the best known songs, but it’s the instrumentals that make the biggest impact. The story’s climax is backed by a string-heavy orchestral called “Transformation,” which has the power to send chills down anyone’s spine.

Legendary producer T-Bone Burnett headed the bluesy LP. This record is the reason he Cohen brothers have a reputation for making movies with great soundtracks. If it wasn’t for this first foray into American music standards, Inside Lewyn Davis might never have been made. O, Brother‘s soundtrack peaked at number 1 on the US billboard charts thanks to “Man of Constant of Sorrow” from the so-called Soggy Bottom Boys. It even went on to win the 2002 grammy for “Best Country Collaboration with Vocals.”

Classic rock and roll has the day in Quentin Tarantino’s 1994 classic. Dick Dale’s “Misirlou” plays through the opening credits, and later in the movie we hear Al Green, Dusty Springfield, and Chuck Berry. Laden with surf rock as well as 50’s and 60’s hits Tarantino called the music for his film “rock n’ roll spaghetti western music.” The cowboy spirit oozes from this movie, and its music only reinforces the eff-you spirit of the film’s characters.

While this movie left something to be desired in terms of writing and acting, the music is immaculate. There’s a reason the record went platinum not once, not twice but THIRTEEN times in the US alone. Every one of its 9 tracks can still be heard on hit radio stations today. And even if it had not sold a single copy, the songs would still be unquestionably genius. “Let’s Go Crazy,” “I Would Die 4 U,” and “When Doves Cry” are all pop classics that have stood the test of time. This movie is responsible for giving the world Prince’s best work, so maybe some of it’s low points can be forgiven.