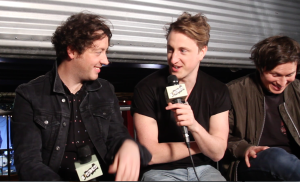 It’s been four years since the release of the last album by The Wombats, “This Modern Glitch”. The album was well-received with standout tracks, “Jump Into The Fog” and “Tokyo” elevating the band’s profile and a tour schedule consisting of numerous festivals and headlining tours. With lead singer Matt Murphy in Los Angeles, CA for part of the songwriting process, the other members, Dan Haggis and Tord Overland Knudsen remained in Liverpool to work on instrumentation and other aspects of creating the music. The result is the band’s third studio album, “Glitterbug”, which will be released on April 13, 2014 and features lead single, “Greek Tragedy”.

The band noted the album was inspired by Murphy’s personal experiences in Los Angeles. B-Sides host, Pete Mar, spoke with The Wombats during their San Francisco stop of their mini-tour. The band talked about the making of the album, how certain things played out during the recording process and shared their tips on Valentine’s Day.

Check out the interview here: