Hit the ground running Friday afternoon to kick off one marathon of a weekend.  After being greeted by the sounds of Cherub and Albert Hammond Jr., the task at hand became trying to snag a spot at Billy Idol among a huge crowd that defied to be defined generationally.  Idol definitely still has it, but so much talent spread on multiple stages vied for attention.  For example, Rey Pila across the way on the Tito’s stage connecting with many loyal fans like hometown heroes at a backyard BBQ.  The crowd was so friendly and the music so infectious at Rey Pila that it was impossible to leave early even with Run the Jewels and Moon Taxi up next. 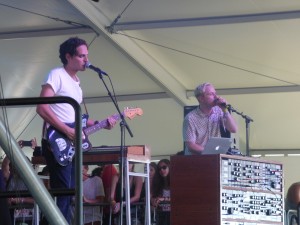 After a stop at Tame Impala, the race over to Flosstradamus’ set began.  That is not an exaggeration, everyone wanted to be there for one hell of a set and Floss did not disappoint.  The duo outdid even their fellow Mad Decent pals Diplo and Skrillex and throwing down for a crowd that turned almost immediately into an hour long mosh pit.  After getting thrown about and nearly trampled, seeing Disclosure was like entering a parallel universe of good vibe and a massive, yet chill crowd.  Mixing their new songs with the old, they got the crowd singing back under a sky filled with stars, friendship flags, and vibrant lights. 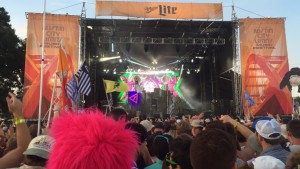 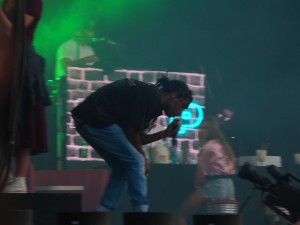 Saturday evening started off with just about every girl trying to get on stage with G-Eazy before climbing on shoulders to get close to A$ap Rocky. When Wild for the Night came on, it was almost as if everyone set that as their goal. Even if heavy bass or dubstep is not your thing, a Bassnectar show is a strongly recommended experience. Drop after drop and an incredible light show drew more and more people in. By the end of the show, there was a separate, curious crowd observing from the back.

Bassnectar perfectly preceded Deadmau5’s headlining set. Any thoughts that Drake was performing across the festival went away completely- an effect of the Mau5 trap. Melodic old favorites kept everyone hypnotized, even causing some to attempt to sing along- even without words. 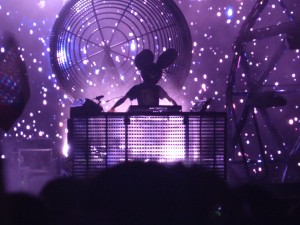 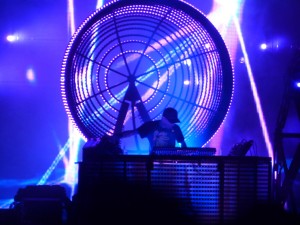 Sunday was neither lazy nor easy. The area around Classixx was occupied by people dancing around each other or climbing up in the trees to either escape or just get a closer look. From there, everyone hopped over to see Chance the Rapper. Griz’s set was incredible. It was also incredibly exhausting watch him so expertly play the sax at the same time. Everyone was instantly brought up and there were many hugs among complete strangers.

Nero was an easy option for those not-yet-tired, but was less aggressive than Bassnectar and Flosstradamus. The Weeknd was an even more perfect ending than was expected.  Abel Tesfaye’s voice moved many and he has true power as a performer.  An our later, no one wanted The Weekend to stop. That last walk after the festival was bittersweet, half struck by what we just saw and half sad that weekend one had come to an end. 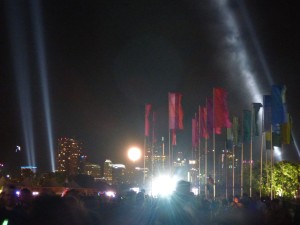