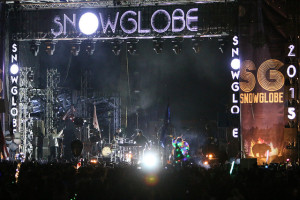 Happy 2016!! As has been tradition for the past several years, EDM music fans have rung in the new year at with the SnowGlobe Music Festival in South Lake Tahoe, CA. The annual event features multiple stages of both new and familiar artists performing against the backdrop of the picturesque snow-capped mountains. This year’s incarnation brought an extra level of excitement as the snow season got off to a great start in late 2015 and provided plenty of skiing or snowboarding during the day. The three-day event featured another solid lineup featuring, Jack Ü, Kaskade, Dillion Francis, Chet Faker, G-Eazy, Eric Prydz, Ghostland Observatory, Duke Dumont, Run The Jewels, Claude Von Stroke, Cashmere Cat, Galantis, What So Not, E-40, Cut Copy (DJ Set), Justin Martin, Shiba San, Alison Wonderland, Lane 8, Bob Moses, Jai Wolf, NGHTMRE, Hippie Sabotage, Goldlink, J. Phlip, Kyle Gryffin, Autograf, Post Malone, Justin Jay, Vanic, Big Wild, Slumberjack, Zimmer, Hotel Garuda, Louis the Child and others. Festival attendees were not deterred whatsoever by the cold temperatures as audiences were dancing and singing along to the music and were all outside for the countdown to the new year capped off by fireworks. Check out the photo highlights!