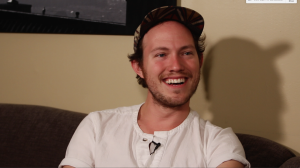 Paul Hammer of Savoir Adore has been through some life-changing events over the last few years. The band’s co-founder, Deidre Muro, decided to leave the band after working together for seven years. As Hammer contemplated how to proceed with the band, Hammer’s love life was headed toward new heights as he recently got married to his girlfriend in 2016. Re-inspired with new music and a new band member in Lauren Zettler, Savoir Adore re-emerged in 2016 with two new tracks that are part of the band’s up-coming new album, The Love That Remains, which is due out this summer.

B-Sides caught up with Hammer during the band’s San Francisco tour stop to talk about the band’s lineup change, new music, his recent nuptials and more.