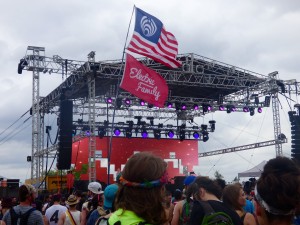 I am no stranger to music festivals, so as I packed for Euphoria I was excited to relive my camping experience from Wakarusa- one of my favorite memories that past few years.  A road trip, camping, and a killer lineup promised me another perfect weekend even though I knew that anything could happen.

We missed the crowds by arriving at the festival a little later on Friday. The attitude upon arrival was a little hectic, everyone we met was friendly to the point where you didn’t mind bouncing around among the chaos and the excitement.  Although we felt prepared with our camping equipment and portable chargers, we realized we had forgotten about the poor cell service (not ideal when you are trying to find your friends and your camp spot in the dark).  However, the excitement in the air at Euphoria hits you in full force as you enter the grounds and is infectious enough that hauling camping equipment in the dark easily becomes a funny story with a friend.

I got my bearings while Tycho played in the background.  My walk to the Dragonfly stage where I would see SNBRN came with quite a view of lights and colors in the form of art, costumes, signs, flags, and a variety of personalities.  Not a bad start.  Much like the rest of my Euphoria experience, I arrived at the Dragonfly stage without any idea what to expect, but what I found surpassed any expectation I could have ever set.

Set up similar to an outdoor amphitheater, the Dragonfly stage sits downhill from the rest of the festival with Carson Creek providing an unreal setting to see any artist who takes the stage and a perfect place for me to head upon arrival.  SNBRN threw himself the ultimate birthday party, opting to extend his set to the delight of a wild crowd.  Thank you SNBRN for showing me that the only thing better than photographing your show is shooting photos before being pulled into a bear hug by your friends you’ve been searching for.

By the time I got back to my tent, my patch of ground I would be sleeping on for the next three days never looked so inviting.  I fell asleep exhausted, but overwhelmingly happy.

I woke up for my first full day at Euphoria to the sound of my friends still talking about yesterday’s adventures.  I got up in order to take advantage of my hot shower pass and hop in line for breakfast tacos and a cup of coffee that was way too good to be from a stand in the middle of a campsite.

The couple of morning hours before the music starts are busy at the Euphoria campsite in the sense that those hours seemed to be devoted to getting to know as many new friends as possible.  The camping ground starts to feel like a community instantly and it’s hard to fill your head with a negative though as you are offered anything from breakfast to beads from upbeat strangers.   I even spent some time decorating a fellow camper with tons of shiny little star stickers.

As I headed to the Elements stage on my own for Shiba San, I found myself walking next to a member of the security team.  Maybe it was because I had been striking up conversations with strangers all day, but we began getting to know each other as we headed the same direction.  It’s amazing how far a friendly conversation can take you.  In this case it landed me in the front row of the VIP section, a prime location to watch Shiba San’s incredible light show along with a set that was so good, I never realized I was dancing like a crazy person surrounded by strangers turned dance partners.

I spent the moments in between Shiba San and Eric Prydz getting to know those around me, including a guy in a Prydz shirt and headphones who also appeared to be solo for the show.  I explained to him briefly why I had a camera before Eric Prydz came on stage.  Growing up listening to dance music, I knew Eric Prydz would be an amazing experience I would not want to miss.  I did not realize just how right I would turn out to be.

About three songs in, an older man approached the VIP barricade from the side of the stage.  He showed the guy next to me a note on his phone.  I could not hear what words were exchanged, but what I did hear was my new friend next to me look over in my direction and ask, “can she come too?”  Next thing I know, the two of us are standing on stage watching an Eric Prydz set from almost the same vantage point as Eric Prydz himself.  The best way to describe the experience?  A surreal experience and one hell of a beautiful accident.  It’s the kind of experience that can only be found at a place like Euphoria.

The energy of a crowd like that is more powerful, even overwhelming, than I could have ever imagined, so naturally my new friend and I decided to continue our adventure.  We figured Bassnectar would be a good place to end up next.  A Bassnectar newbie, I assured my new friend that the best move would be to head straight into the crowd.  We weaved through mosh pits and found a spot with just enough room for dancing (without getting punched in the face) to watch Bassnectar surrounded by lasers and the craziest collection of signs, flags, and other random objects on poles.

Even at the end of the show, both of us had the sense that the night was not over.  We followed the rest of our neighbors towards the tents, but for some reason that crowd felt like the wrong place for us even though we had just made ourselves at home in the craziness at Bassnectar.  We decided to take a different route, unsure of where we were going.

The path we decided to create led us into the artists tent in the company of some artists I had seen earlier that afternoon.  Never did I ever think I would see them several hours later, much less that we would all be accomplices in an unsuccessful attempt to start a golf cart.  Later I was reminded that I had always been amused at the image of a Silent Disco, but I couldn’t keep a straight face as I tried to explain to my new squad why all these people wearing blinking headphones were dancing around in the dark in what appeared to be complete silence.

I woke up Sunday morning to the sunlight flooding through the tent and spent a few minutes making sure last night had not just been a dream.  I also woke up to find that all the precious portable chargers we had brought to our campsite were dead, so Sunday morning activities consisted of a shower, coffee, food, and making friends at the charging station.  Although my Saturday night could be told in what I though was a crazy story, the cool thing about Euphoria was that I quickly found out I was not alone.  All morning I enjoyed being told or overhearing the crazy adventures that had occurred over the past few days.

Sunday’s line-up also seemed to fit the mindset of the majority perfectly in the sense that there was something for those ready for one hell of a #SundayFunday as well as a less aggressive path for those willing to take it.  I started off easy at the Dragonfly stage with Flying Turns, even wandering off to where other groups sat in hammocks or just gazing out over Carson Creek.

Once I began to let the excitement wake me back up, I headed to Elements for Mashd N Kutcher.  A long-time Gucci and Waka Fan, I was pleasantly surprised at how I had forgotten how talented Waka Flocka is with a crowd.  He may have seemed like a bit of a wild card in terms of the line up, but he killed it effortlessly and was the perfect lead-up to Crizzly even with the slight interference of the fire marshall.

I headed back over to Dragonfly to see Alex Cruz, a Dutch DJ who’s star is rapidly rising in the EDM world.  The Dragonfly stage was the perfect backdrop for Cruz’s deep house set that delivered the perfect mix of chill vibes and dance-worthy tracks for a Sunday.  Cruz was followed by my favorite find of the festival, Sabo.  Sabo’s set mixed tribal sounds with deep house that make for the perfect mix of smooth and sexy.

Still recovering from last night’s accidental adventure, I was caught off guard when I ended up back in the artists’ lounge once again post-Dragonfly.  I had already seen first- hand how easy at Euphoria it is to make friends, but was pleasantly surprised to see that even the artists fall under the same spell.  I was reunited with the gang from the previous night, who were hell-bent on seeing Lil Dicky, and insisted on the full experience by watching him from inside the crowd instead of backstage or from V.I.P.  A Lil’ Dicky show is more like going to see a stand-up comic than a concert, but only if the comedian can rap as fast as Twista (tbt).

I was suddenly reminded that it was Sunday night and the past two days had been nothing short of spontaneous and nothing less than magical.  It seemed like supernatural favor that Above & Beyond would close out my time at Euphoria, but when you get caught in mild rain surrounded by strangers-turned-friends, there’s no denying it.

After days of being lost in what had felt like a fantasy, I felt a slight sense of melancholy sneak into the back of my mind as Above & Beyond left the stage.  I made my way back to the campsite feeling a little sad that it might have to be all over.  Once again, I was wrong.  Instead, I ended up at a Silent Disco turned DJ battle featuring all of Sunday’s best.  As I danced like an idiot to an old school remix on the blue channel I realized that instead of strangers, I was surrounded by friends. I realized that Euphoria had allowed me the chance to write my own story as it had everyone else. However, these are the stories you can’t make up.  Euphoria can be reached, you just have to find it for yourself.