WARPED TOUR INTERVIEW: Maxx and Zach of Set It Off 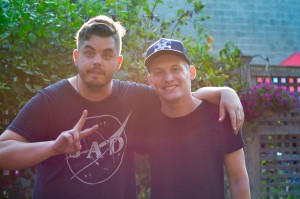 Set It Off isn’t the typical rock and punk band usually seen at Warped Tour. They mix together traditional punk sounds with pop vocals and beats. But they always put on a high tempo and energetic performance that placed them a spot on the Main Stage at this year’s Warped Tour. Formed in 2008, in Tampa, Florida, Set It Off began making a reputation for themselves. Currently made up of vocalist, Cody Carson, lead guitarist, Dan Clermont, rhythm guitarist, Zach DeWall, and drummer, Maxx Danziger. The group is packed with genuine and extremely talented guys that made a great addition to Warped Tour 2016.

You guys just released, Something New, and in the music video you didn’t play it safe, you all tested your fears, what made you want to do that instead?

Maxx: Also it kind of goes hand and hand with the fact that when we release a new song it is scary. You know, what if they don’t like it and fans aren’t into the song? So it kinda goes with that, when we released Something New, we did a bunch of stuff that was scary but we ended up, not enjoying it obviously, obviously didn’t enjoy having a tarantula on me, but we feel better now.

Zach: Ya I tried to get out of it like six times.

Maxx: The handler literally said “Hey don’t be scared because it can sense that and will get stressed and bite you.”

What is the craziest thing you have seen so far on Warped Tour?

Maxx: There is a Glitter Fairy. A guy dressed up as a Fairy, and if you ask him, he will put out his palm full of glitter and blow and glitter goes everywhere.

Was this at a lot of shows or just one?

Maxx: He was at the first probably week and a half

Zach: There is also a scooter gang.  Just a bunch of people on scooters hanging out. They aren’t threatening but they are a gang.  There are motor scooters and regular scooters.

If you were told you could only bring one thing to Warped Tour, besides an instrument, what would it be?

Maxx: Ya that is true I would need my cell phone. How am I supposed to play Pokemon Go with out a cell phone?

Do you guys have a pre-show ritual?

Zach: It’s actually funny because for like three or four years, I don’t know if you’re familiar with the show Dragon Ball Z, but it was a move from that show and we did that for years and slowly and slowly we’ve been adding to it and it has gotten pretty long. Now it’s like a whole pre-show ritual that we do. We do a dance, we run, we do “finger guns” at each other. But it’s real fun. It’s something that we have to do, if we didn’t, the show wouldn’t feel right.

Maxx: We’ve never not done it.

Zach: I think we missed it one time and the show was awful.

Do you guys ever have nerves going on stage?

Maxx: We were just talking about this. And that generally speaking, we don’t see the crowd until we are on stage.

Zach: And this is out first year on the Main Stage.

Maxx: The crowds have been very very good. Really excited with the turn out. But still to this day, every time we walk up there we have this fear, what if no one’s there?  What if we go out on stage and there are three people.  Luckily, it has not happened yet. But there is always that thought in the back of my head, what if every decided to skip us. But Boston gets rowdy.

Describe Warped in one sentence.

Zach: So many hangs, there are so many friends on this tour. It’s been to awesome to hang with all of the friends.

Do you meet a lot of people?

Zach: Ya, meet a lot of people and it’s bands you wouldn’t tour with. Like, we are really close with Crown The Empire, but we are so different as bands. We did tour together in the past, but we are different bands now.

set it off warped tour