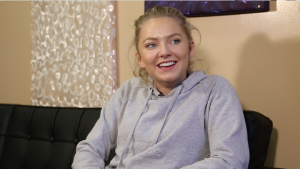 Norwegian singer/songwriter Astrid S has been gaining notable attention in 2016 with the track “2AM” as well as her collaboration with fellow-Norwegian act Matoma on the track “Running Out”. The 20-year old got into music at an early age, starting with the piano at 6 years old, picked up the guitar as a young teenager and singing and writing songs. Appearances on Norway’s ‘Pop Idol’ showcased her talents and although she came in fifth place, the experience led to greater opportunities. She’s worked with numerous high profile producers, won her first MTV EMA award as Best Norwegian Act, got two out of four awards at P3 Gull, and was nominated for Best Song (“2AM”) at the Norwegian Grammy Awards. Astrid S is currently on tour in Europe and Scandinavia, having sold out all her headlining shows.

B-Sides On-Air caught up with Astrid S during her U.S. tour with Troye Sivan in San Francisco. The Norwegian singer spoke with host, Pete Mar, about her experience on ‘Pop Idol’, transitioning from being a guitar-based songs to more synth-pop based songs and more. Check out the interview: