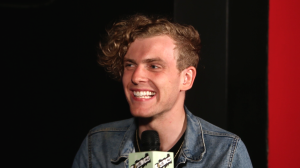 Nashville-based band, COIN, broke through last year with B-Sides favorite, “Run”. The infectious track introduced the band to a growing and loyal fanbase to their self-described pop songs with rock instrumentation. Their wide-ranging influences of punk, new-wave and rock from artists such as, The Cure, Psychedelic Furs and The Ramones amongst others, can be clearly heard in their music. After touring in support of their self-titled album, the band took a break to work on the follow-up. Eager to get new music out to their fans, COIN released “Talk Too Much” ahead of the album, which is in the final stages of completion. “Talk Too Much” has already garnered more radio play and support than “Run” and momentum is still going strong.

B-Sides met up with the lead singer of COIN, Chase Lawrence, during their tour stop in San Francisco to talk about the success of “Talk Too Much”, the upcoming album and more. Check out the interview: