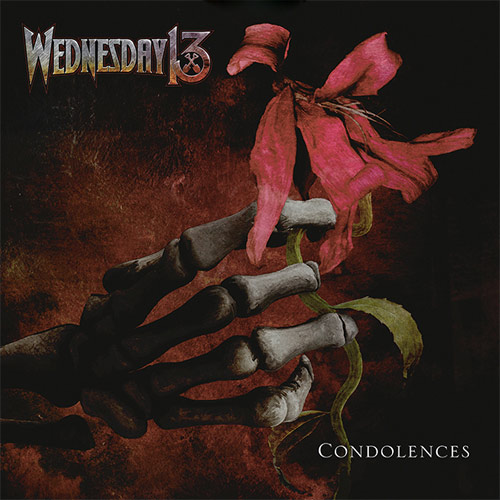 Let me preface by saying, Wednesday 13 has a heavily defined style of songwriting and vocal delivery that’s been uniquely crafted and sculpted in gory greatness. It’s completely unmistakable regardless of his efforts to add more minor chords and depressing harmonies to each album throughout the years. Wednesday’s probably more well know for his work in the band Murderdolls, back in 2002, where he joined forces with Joey Jordison, the ex-drummer of Slipknot.

The whole album was actually based off of a previous band Wednesday was in called Frankenstein Drag Queens From Planet 13. If you haven’t heard of them, you need to check them out. The whole catalog of efforts put forth by Wednesday 13, thus far, has always been highly influenced by a unique style of horror-punk, cheesy b-movie quips, and old school rock n’ roll thematics. The guy even did a country project called Bourbon Crow.

With the new album “Condolences”, expectations are shattered and the overall tone has changed dramatically. Wednesday 13 has wandered completely away from the tried-and-true three-chord punk style and has harnessed something fuller, darker and tragically more moody. The entire album is definitely heavy, in the general sense of the word, but, more in a sadder funeral-rock type of way. It’s almost too heavy for the vocal style Wednesday’s known for. The tongue-in-cheek lyrics he’s infamously spewed throughout the years are still there, just in smaller amounts, such as “If you don’t mind, I’ve got a corpse to grind, in the back of my hearse” featured on the track “Cadaverous” and “Don’t you understand, I’m just the boogeyman, and I’ve come to cut you down” from “Cruel to You”. What we have is a more serious and grim album this time around. The fun that could’ve been is lost due to the low-tuned, guitar driven, dismal-graveyard sound that’s displayed throughout the record. This is a recurring theme and I can’t help but think what the album would sound like with a handful of punk chords and played in standard E tuning like most of his earlier work.

Despite the changes, after a few listens, the album really opens up and feels more like a passionate work of art than an attempt to just do something different. Think of “Condolences” as a David Cronenberg film, as opposed to previous efforts being more of an Ed Wood style. The album opens up, after the intro, with a track called “What the Night Brings”, spilling forth horror and a vile vocal delivery that truly sets the tone and distinguishes this as a grimy, more focused, album. I’ve gotta say, the vocals are pretty awesome this time around. There’s an obvious attempt to add a creepier, more vicious delivery and it’s definitely appreciated. There’s still a few tracks that are reminiscent of his older catalogue of works, such as “Omen Amen” and “Cruel to You”, which are more fun and campy but, the entirety, is a distorted opus of brooding sci-fi horror mayhem. You can almost taste the Alice Cooper influence while listening to some of the songs. The title track “Condolences” is probably the best example of that and is layered with rusty piano arrangements and enough spooky storytelling to satisfy even the most ghoulish of appetites.

“Condolences” really grew on me and, even though I was expecting more of a classic Wednesday 13 album, I was pleasantly surprised and can definitely see myself enjoying the collection of songs for what they’re worth. Ultimately, I recommend checking this out and think it’s a really strong effort. This guy has some incredible talent and, making a career out of campy horror goodness can’t be easy. Especially when it’s sliced up into over a dozen albums in the last decade or two.