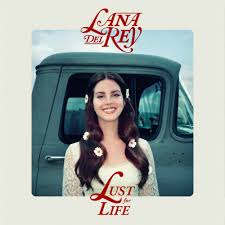 Love her or hate her, Lana Del Rey has managed to carve herself out a spot in pop culture that might put the “cult” in pop culture. On her fifth album, “Lust For Life,” she seems to be attempting to reach outside of her circle, but not too far. While her vocals maintain the cool, buzzed lounge singer croon she’s been toting since she debuted on Saturday Night Live, the tracks on this album incorporate more modern tones, with hip-hop driven beats, and guest appearances from the likes of The Weeknd, A$AP Rocky, Stevie Nicks, and more.

The album starts strong, with “Love,” a huge, almost cinematic sounding song that builds slowly over a lax, pulsing beat. It’s almost a bridge for departing her old sound, pushing forward into the sound she toys with for most of “Lust For Life.” Up next is the title track, featuring The Weeknd, and bolstering a great balance of their individual sensibilities. The Weeknd feels more reserved here, while Lana pushes little more than usual, almost using eachothers strengths to bounce off one another. The chorus is reminiscent of T-Swift’s 1989 cut “Wildest Dreams.” This is currently the big single from the album, and the reason is no secret, this is sure to be on Lana’s set lists for the foreseeable future.

The album hits a hurdle early, with the boring and overlong “13 Beaches,” but quickly bounces back with the mellow, hip-hop infused “Cherry.” “Summer Bummer” coasts along nicely, but is really elevated by the verses from A$AP, and newcomer Playboi Carti. A$AP hangs around for the following track “Groupie Love” where he shows off some of the vocal capabilities he started utilizing on 2015’s somewhat overlooked “AT.LONG.LAST.A$AP,” a one two punch collaboration that works well enough to merit the question of these two releasing an entire album together.

Overall, “Lust for Life” is a win for Lana Del Rey fans. She maintains a great deal of the sound that won her fans over to begin with, while also stretching into unfamiliar, yet compellingly interesting territory. Lana is likely to win over some new fans with songs like “Summer Bummer,” “Groupie Love,” and the albums title track, but the other half of the album surely seems to be more for the diehards. Whatever the case, “Lust for Life” earns it’s keep in Lana’s discography.