Lightning In A Bottle 2018: Yoga & Movement Adds Respite and Energy

As much as the music is a highlight at Lightning in a Bottle, there are other activities and offerings that are intertwined, in particular the Yoga Movement that’s been known to re-energize attendees after the long days. Yoga, movement, and meditation are staples of the LIB experience each year, as the festival invites many innovators and experienced instructors to lead a full roster of classes. Classes and teachings range from Vinyasa, Kundalini, Ecstatic dance, Kids Yoga, Sound healing, and more. This year’s Yoga Movement is led by Cristi Christensen, Shiva Rea and Sianna Sherman and Masood Ali Khan.

Christensen will lead the “Deep Exhale” with Marques Wyatt. Christensen is a former elite-level gymnast and platform diver, who trained with the US Olympic diving team as a young adult. It was an injury that prevented her from continuing on, so she shifted her focus to helping others improve their level of fitness through personal training, Pilates, Core Fusion, and yoga. After earning her degree in Kinesiology, Christensen studied extensively for over 10 years with world-renowned teachers including Saul David Raye, Shiva Rea, Seane Corn, Elisabeth Halfpapp, and Fred DeVito. Rea is well-reknowned as a leading innovator in the evolution of prana flow yoga, transformational vinyasa flow integrating the tantric bhakti roots of yoga, Krishnamacharya’s teachings and a universal, quantum approach to the body. She is known for bringing the roots of yoga alive for modern practitioners in creative, dynamic and life-transforming ways and for offering the synthesis form of prana flow out in the world. Sianna Sherman founded Mythic Yoga Flow® and Rasa Yoga, as well as co-founding Urban Priestess®, a modern-day mystery school for women. Sherman has led numerous high-vibration workshops & teacher trainings, retreats & sacred site pilgrimages and online programs. 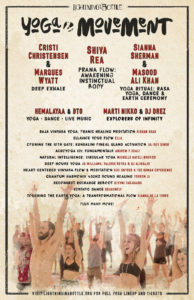 Other offerings include The Art & Spirit of HoopDance, where the founders of the modern art of hoop dance is led by Aaah aka Hoopalicious. Deep House Yoga will be led by Valeria Rutka and JQ Williams in unison with event producer and DJ, Alissa Seymoure. There are meditations that will be on-going, led by experts in the field such as, Anna Bliss, Erika Leigh Raney Inez Aires and others.

Lightning in A Bottle has grown over the years and this year’s lineup brings in a musical lineup that represents the ethos of the event. This year’s performers during the Memorial Day Weekend event will include Anderson.Paak & The Free Nationals, Sofi Tukker, Zhu, Griz, Tune-Yards and numerous others. Tickets can be purchased via their website.