When the announcement for the inaugural When We Were Young was released, many music fans rejoiced over the lineup that included headliners My Chemical Romance and Paramore along with the bands that were the soundtrack to their formidable teenage years like Jimmy Eat World, AFI, Dashboard Confessional, Taking Back Sunday and 50+ others. Online skeptics were unsure how the total of around 60 bands would be able to perform over the course of a single day but their concerns were quickly answered as the dates got closer. Announcing that the same lineup would perform for a single day on October 22nd and then again on the 23rd and 29th, emo fans from all over the world had made their plans to descend upon the Las Vegas Festival Grounds, where the event would take place. Unfortunately, the first day was canceled due to high winds that were deemed too dangerous by weather officials and local authorities for the bands to perform and attendees to be safe. Festival organizers promptly posted the announcement via social media and indicated that the Saturday attendees would be given a refund for the full amount they paid via the festival portal. The disappointment was strong and felt online as well as amongst those in town. A handful artists put together last minute shows at small venues around town that were mostly free, like The All American Rejects, Bring Me The Horizon, Hawthorne Heights, Armor For Sleep, The Red Jumpsuit Apparatus, Knocked Loose and Landon Barker. Long lines of people were seen outside of the venues, which had reached capacity quickly, leaving those Saturday attendees left to find other activities to get into around town.

With sunny skies and somewhat calmer winds for Sunday, the first run of When We Were Young finally took off. Long lines were seen at the box office, while those with digital tickets were able to get through the festival gates. Early performers The Linda Lindas were a perfect fit for the festival with their exciting take on punk music. As fans were still streaming in, many ventured by the Stripe Stage to catch The Red Jumpsuit Apparatus, who put on a fun set highlighted by their radio hit “Face Down” that had many jumping and singing along. Wolf Alice was a great addition to the nostalgia-heavy lineup and delivered a solid set of their brand of British rock music highlighted by “You’re A Germ” and “Play The Greatest Hits”. Seeing bands like Boys Like Girls triggered loud singalongs to many of their songs, notably “The Great Escape”, which was stopped and restarted when lead singer Martin Johnson called for people to put away their phones. He stated that they were “going to do the 2006 version” when TikTok and recording via phones were not a ubiquitous presence as they are today. Pierce The Veil was a wildly popular set that had people jumping, moshing and singing along. The cheering and screaming reached another level when the band brought out Kellin Quinn for “King For A Day”. Not only were We The Kings in fine form delivering the classics like “Skyway Avenue” and “Check Yes, Juliet”, they also performed a solid cover of “Mr. Brightside” by The Killers that kept the singalongs going. 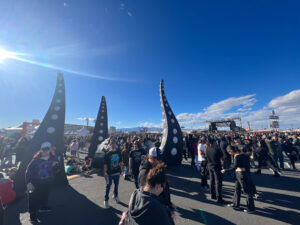 Other highlights from the day were Dashboard Confessional, whose emotive songs brought back so many memories with “Vindicated,” “Hands Down” and “Screaming Infidelities”. With the allotted 30-40 minute sets, bands like AFI, Taking Back Sunday and Jimmy Eat World were able to fill up their timeslots with bangers from all the radio airplay they got during their heyday, while sprinkling in one or two new songs. As the evening approached, Avril Lavigne took to the Black Stage and commanded the stage expertly with singalongs, leading them during “What the Hell”, her cover of blink-182’s “All The Small Things” with All Time Low that was followed up by “Skater Boi”. The All-American Rejects were thoroughly entertaining, as lead singer Tyson Ritter showed up on stage in a gold sequined jacket and grey hair to look like an old Vegas showman. It was befitting for what was to come with My Chemical Romance. The band was electric right from the very first organs of “Swing Swing” to their other hits including “Dirty Little Secret” and “Move Along” that had nearly everyone singing along.

Needless to say, the night ended with epic sets by Paramore and My Chemical Romance. Both bands are on tour and were in their best form that kept the crowds cheering. Paramore surprised everyone by starting off their set with “All I Wanted”, a song that their hardcore fans had been waiting to hear ever since it was released on ‘Riot’ in 2007. Lead singer Hayley Williams was active and personable, even stopping a moment to reflect and talk about the evolution of the punk and emo scene and how there’s space for young women, people of color and the queer community. Musical highlights from their set included “Last Hope” and “Here We Go Again”, which elicited overwhelmingly loud cheers. My Chemical Romance surprised everyone by showing up in prosthetics and makeup to make them look old, along with their attire from the “Black Parade” era. It was the band’s visible stance pushing back on the narrative that they’re a nostalgia band. Starting off the set with “I’m Not Okay” on-stage banter was kept to a minimum, as lead singer Gerard Way was dressed in the era’s signature black suit and red tie would growl and speak as an old man into the microphone in between songs every now and then. Songs like “Planetary”, “Ghost of You” and “Helena” had the crowd dancing and singing along and the shoutouts to “Utah” were comical as Way purposefully was playing up the old man routine. Phones were out shining the LED lights and recording the band’s performance of “Welcome To The Black Parade” and even into “Teenagers” that followed it up.

Unofficially billed as the ultimate emo rock festival, When We Were Young overcame the initial bad press due to the weather and more than made good on a spectacular day of music. The shortened 30-40 minute sets throughout the day were perfect to satisfy the casual fans and were reminiscent of running around from stage to stage during Warped Tour back in the day. The only thing missing was the inflatable lineup schedule that people would reference and use as a meeting point. The sold-out affair certainly felt like 85,000 people were in attendance as it certainly felt tight at the Black and Pink stages that were side by side. The spacing of the Stripe and Checker stages, however, was set up just fine and allowed for a little better movement for fans who wanted to leave or move onto another set. But for a day of nostalgia, all the bands were in great shape and had no problems playing hit-filled sets that were fun and made it worth the time and travel for many attendees. Next year’s event promises to be just as fun and exciting when Green Day and blink-182 headline a more pop-punk skewing lineup.