As a fan, you often wonder where your $60+ for a ticket to a big show goes. The band just stands there and plays – you need $60 for that? This isn’t the case at a Marilyn Manson show. You have no doubt that 100% of that ticket price goes towards giving you, the fan, one of the most memorable nights of your life.

The theme music to “Suspiria” faded and the curtain fell. A masked Manson strutted out onstage, instantly commanding the attention of the hoard of black-clad, heavily made-up fans who roared their adulation. He launched the set with “Hey Cruel World”, the opening track off his new album “Born Villain”.

Each song in a Manson set has it’s own corresponding story and theatrical set,  a flurry of props and set pieces flew around the stage from song to song, each one more outrageous than the next – but you can’t expect anything less from a persona as eccentric as Manson.

Manson joked with the crowd after “No Reflection”, saying “Denver and surrounding cities. I’m sure you came to see one thing besides the tits, dick or vagina of the person next to you, which is perfectly respectable.” Manson continued to show his playful side as he rubbed a fan’s phone on his crotch before tossing it back during “Personal Jesus”  and then blew white powder on his band members, ambling around the stage in a white fur wrapped coat as the word “DRUGS” in blinding lights rose above the stage.

But it’s not all gimmicks and spectacle during a Manson show. The band proved they can a deliver a legitimate rock-n-roll performance during “mOBSCENE”,  “Slo-mo-tion” and “Sweet Dreams”, a Eurythmics cover. Manson altered between guttural growls and sinister screams as fans shrieked and chanted the lyrics back to him. 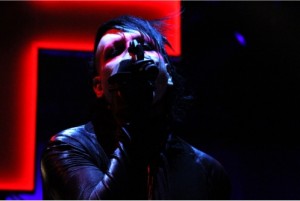 “Personal Jesus” and “Antichrist Superstar” were by far the biggest spectacles of the night. Manson released a bunch of red, white and blue balloons as the stage exploded with light and American flags, launching “Personal Jesus” with a bang. Fake snow rained down as a Hitler-esque Manson preached at his minions from a looming podium during “Antichrist Superstar”. Manson was electrocuted by a prop during the song but he continued on, later explaining to the crowd “I wasn’t being a p*ssy. I was electrocuted and it made my hand bleed, so now I can’t punch things with that hand.”

Manson closed out the set with “Beautiful People”, undoubtedly the most popular song among Manson fans. He still performed the song with a gusto even though the band has probably played the song close to a couple thousand times. Confetti cannons exploded and rained down as Manson paused for a moment before saying one last goodbye to the crowd. “Colorado…Denver, Colorado…not my fault.” He said with a smile, “Best crowd ever.” before simply walking offstage. 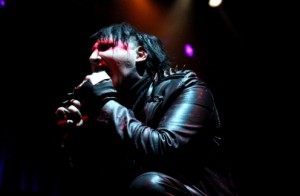 The “Not my fault” comment was referring to when Manson was blamed for inspiring the 1999 Columbine shooting in which two students went on a shooting spree at Columbine High School. Judging by the positive crowd reaction, Colorado has either forgiven, forgotten or never blamed Manson for the shooting in the first place.

“Born Villain” is now available on iTunes and Spotify. You can have an unforgettable night for yourself at these remaining Twins of Evil tour dates. We highly suggest you make it out to this show!