The skies cleared for the last day of ACL 2012 and some of the best acts were saved for last.

Alt-J, a British quartet formed back in 2007, performed for the first time at ACL early Sunday to a smaller, but enthusiastic crowd. These guys are blowing up and we predict they’ll be back in a few years performing to a huge audience, in a more coveted slot. Manchester Orchestra’s Andy Hull and solo artist Kevin Devine formed Bad Books and released their first folk and indie influenced collaboration in 2010. We spoke with them this weekend and fell for the bearded boys and their humble success stories. It’s hard not to like two guys who look like they could hang out in east Austin, sipping Lonestar and it doesn’t hurt that they sing a song named after the great state of Texas.

Originally from Minnesota, Channy Leaneagh from Polica apologized for her southern accent that seems to only come out on stage. One of the most relaxing and calm bands out there right now, Polica played an unexpected energetic show, adding to their ever-growing number of fans. Sweet and simple Tennis performed tracks from their new album and sounded bolder and more robust live.

A mid-afternoon dance party from Two Door Cinema Club was my absolute favorite show of the weekend, reminding me of how far they’ve come since their ACL performance two years ago. A much bigger crowd this time around lined up at least an hour before to sing along to new music from Beacon and older favorites. After B-Sides spoke with Alex Tremble, we can confirm that despite their huge success, they’re just Irish gentleman who love to perform. 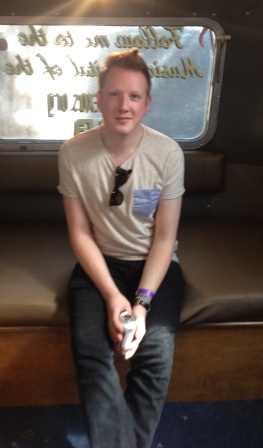 During the Die Antwoord show, onlookers spotted Natalie Portman and Michael Fassbender shooting what looked like footage for their new flick with Ryan Gosling. Aside from celebrity sightings, the show had people crawling on top of each other and acting like they were at a late-night rave even though it was still early evening and relatively calm throughout the rest of the park. While Lumineers fans hummed along to gorgeous, heart-tugging tunes, a huge wall of people built up in between stages and a few fights almost broke out. Somewhere between the mud pits and the summeresque heat, Austinites lost their southern class and the crowd got rowdy. We’ll blame it on the out-of-towners.

Iggy & The Stooges were the surprise set of the weekend, complete with a shirtless Iggy and a sweaty, happy crowd. He flipped us the bird before peacing out and all we could do was thank him for the memories.

Last time the Civil Wars took the stage in Austin, Joy Williams announced she was expecting her first baby with her husband, who sadly isn’t John Paul White. Perfect in an intimate setting, and even more fantastic in outdoor venues, this good looking duo flirted with the crowd and charmed their way into our hearts.

It wouldn’t be a Texas music festival without performances from groups like the Old 97’s and Randy Rogers Band. I’m selective with my country, and tend to favor Mr. Rhett Miller and his poppy cow-men over super-twangy Randy Rogers.

Childish Gambino and Crystal Castles performed at the same time, both heralding two of the best dance parties of the weekend. Donald Glover doesn’t shy away from potentially offending his audience, throwing his lyrics up onto the big screen for all to shout along with him.

Another headliner that had tired festival attendees heading home early, the Red Hot Chili Peppers played their hits for fans who have loved them since the 80s. This band was formed before most of the crowd was born, but ‘Californication,’ ‘Dani California’ and ‘Can’t Stop,’ rang throughout the park, bidding us farewell until next year.