There aren’t many bands who can re-invent themselves album after album the way Anberlin can. Whether it be a contemplative album like Dark is the Way, Light is the Place or an overtly-aggressive album like their latest release Vital, Anberlin is one band you can count on to never put out the same album twice. We had the pleasure of sitting down with  frontman Stephen Christian the day the new album was released to talk about the new material, a short film the band is releasing and how they are running out of rock bands to tour with.

Your last album Dark Is The Way was very mellow in comparision to your new material, did you guys enjoy recording the heavier songs again for Vital?

Stephen Christian: We did, you know but I think that if we went back in time we wouldn’t change anything off “Dark is the Way” simply because we that’s where we were mentally, that’s what we were listening to, that’s what we were inspired to do. But this album (Vital) was fun to write as well. I think that recording my side project Anchor and Braille, which is more mellow, kind of pushed me into longing, wanting the antithesis, wanting that aggression and that energy – that’s why I or why we as a unit pushed it towards being that much more aggressive.

Dark is the Way was described as being a “poetry phase”, what “phase” would you say Vital came out of?

SC: Probably a “Fight Club” phase. I don’t know – something a little more….I want to word this right….just the rawness, just absolutely raw energy. I’ll probably come up with a better word for that later.

This album has been described as Anberlin’s “most imperative” album yet -what is the one thing you think is most important for people to take away from Vital?

SC: I think lyrically it touches on many topics, but the one thing that I would love for people to see if that we are not our past, but we are constantly consumed by creating a better future – of writing better, of song-writing better, of becoming a better band. I don’t want to become that band that everyone comes to see because of an album we put out “x” number of years ago. I think at that point I would have to walk away. I feel like for me that’s the classic thing to do. I think Bob Dylan said in Chronicle, one of his autobiographies, that there came a point in his career where he knew all his best songs were behind him. See for me – nothing against Bob Dylan because I would go watch his tour any day – but if I had that gut intuition that all my best videos, tours, music and songwriting was behind me, I think that’s the day that I would walk away. Because I would rather leave on top where people are questioning “why?”, instead of like “Finally!” – like the “why now? Are you kidding me?” reaction as opposed to “That should have been years ago.”

Vital is Anberlin’s 6th studio album, do you guys have a hard time narrowing down a set list?

SC: Yea, definitely. Every band is anxious to play new stuff because you’ve been playing the old stuff for the last year. But we understand, because if I went to a show, like the Smashing Pumpkins, and all they played was just the new stuff, I’d be like “Ok, I get it. But I’m here to hear all your songs.” I hope that our best songs are yet to come or they are on “Vital” but that doesn’t mean I discount everything that’s behind us. We try to make out set 33% new and 66% off each record and we don’t alienate any single record.

In addition to the album, you guys are releasing a short film called “Pretend to Be Friends” – what was the story behind this film and how it came to be?

SC:  heard this story that a friend told me – it was one of those hearsay stories where a friend told a friend that they had found this tape, and the tape was basically a home recording of U2 during Joshua Tree. Just a video camera in the room and people would pick it up at random moments and film a little bit. You would see Bono sitting there and he would be erasing song titles or song lyrics from the big erase board he uses. He’s just sitting there contemplating. I would love to see these tapes just because it would be so interesting to be there and hear what’s going on, like what are the conversations like? How did they come up with that part? For me it was kind of like I want that fly on the wall, that glimpse into moments on the record. There is a moment when Aaron (Sprinkle, producer on Vital) tells me to go outside and write a bridge for this song. I’m sitting there writing the bridge to “Modern Age” and then I go back in and sing it. It’s just those little moments…but the majority of it is just us goofing off because that is most of what it is when we’re in the studio, everybody is not focused for 12 hours a day.

And it was entirely on film correct? I was just curious to know why? Film is kind of a dying art.

SC: Yea, it is dying art and you get this specific feeling from it. When you watch it you go “oh yea that’s film” or an editor spent years in post-production to make it look like film. The guy that we found – his name is Dustin Miller – he shoots surf videos, or strictly surf videos most of the time, but everything he does is straight film. So when we saw it, it already gave you this feeling, even if it had nothing to do with anything. Even if it was just a surfer riding waves, you were already mesmerized. It’s just a feeling, when you are watching the DVD, you really get the feeling that you are in the moment. 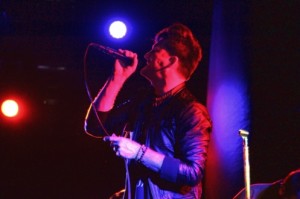 You guys have toured with some pretty awesome bands in the past and now you’re adding  Smashing Pumpkins to that list – are there any other bands you would like to tour with? Dream tour?

SC: Yea…see that’s what’s so crazy is that like the Foo Fighters are on hiatus.

That was a sad day.

SC: Yea! And obviously Nirvana is gone. Is there another rock band? You know what I’m saying? Isn’t that so weird? That if you really think about it, we’ve toured with all the rock bands that are current and now its kind of like who else is there? Pearl Jam or Kings of Leon maybe? But other than that there is just not any out there. We have some upcoming tours that we are going to go back out with some of our friends that I am really looking forward to in the future, but every band that I would name is either dead or broken up so it’s a hard question.

Awhile ago you wrote a book called “The Orphan Anythings” and I was wondering if you were planning on writing another one? I had to ask because I loved your first book.

SC: I am. I’m about 14% of the way through it. But the problem is that I so cross-collateralize myself in characters so much that there isn’t much differentiation. Now I’m trying to develop a new character that isn’t too much like me, which is just a fiasco. So every time I’m writing, I’m like “what am I doing?”. I want it to be so different…but I do have the general premise. I know what’s going to happen and everything like that. I felt like the draw of the last book were those moments of catharsis within the character that actually happened to me where he was just like “life sucks but this one little area is great” and then its like I love this and it just opens a new door, and another door and so on – I think it was the moments of philosophy lost in the midst of horrible grammar that was the endearing quality of it. So, somehow I’m going to narrow that down without mixing myself in the midst of it.

Vital is now available on iTunes and Amazon as well as for streaming on Spotify. You can catch Anberlin on tour with the Smashing Pumkins at the last few dates before they head out on their headlining tour with Morning Parade in November.