prestigious tours to date, opening for the Smashing Pumpkins.  We here at B-Sides got to see the band perform in Denver the day their new album was released and if there is one band that seems to get better with every performance, its Anberlin.

The first track off their new album “Self-Starter” started the set with a storm of sound and energy that have marked Anberlin as one of the most dynamic live bands on the scene – and despite the lackluster response from the crowd, Anberlin gave 110% of themselves in their performance. 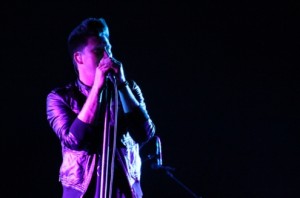 Their setlist consisted of the perfect blend of old and new material, including fan-favorites like “Paperthin Hymn” and “Feel Good Drag” as well as newer material like “Impossible” and “We Owe this to Ourselves”. But where the band really seemed to come alive is when playing their new tracks off of Vital. In addition to “Self-Starter”, the band played “Other Side” and “Someone Anyone”, two of the most atmospheric and explosive songs on the album – we aren’t really sure if its possible but these two songs sounded even more amazing live than they do on the album. “Other Side” held the crowd spellbound as frontman Stephen Christian’s voice soared to new heights.

The band closed their set with “Someone Anyone”, pouring every last ounce of energy into the song before graciously thanking the crowd and leaving the stage. If the crowd wasn’t fans of Anberlin when they came in, they definitely were when they came out.

Vital is now available on iTunes and Amazon for purchase as well as for streaming on Spotify. We highly suggest you check out the “Making of Vital” playlist and commentary on the album the band posted on spotify.

Also check out our interview with frontman Stepehn Christian about the new album here!

Anberlin just finished the tour with the Smashing Pumpkins but you can catch them on their headlining tour with Morning Parade in November.