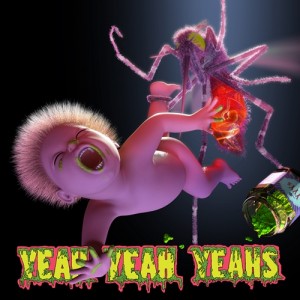 Four years since their last release, The Yeah Yeah Yeahs have announced their new album, Mosquito, will be released on April 16, 2013. Just this past Friday, the trio performed several new tracks at a show in Pomona, CA. Mosquito will be the fourth studio album from the band and is predominantly produced by Dave Sitek of TV On The Radio and Nick Launay with James Murphy of LCD Soundsystem listed as producer on one track.

Lead vocalist, Karen O, mentioned in a press release, “I think this record has more moodier and tripped-out songs than you’ve ever heard from us. You might catch some roots reggae and minimalist psychedelia influences in there.”

Starting January 18, 2013, The Yeah Yeah Yeahs embark on a slew of dates at the annual Big Day Out Festival in Australia.

Check out the teaser for Mosquito: