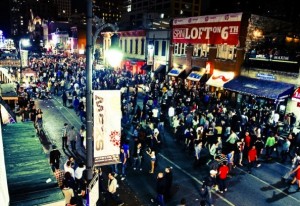 SXSW Festival is almost 6 months away but already people are getting pumped up for this week-long music, film, and interactive festival in Austin Texas, beginning March 7th. This “little” festival which began in 1987, bringing in around 700 registrants, has since grown to over 32,000 participants in recent years.

Along with the film, media, and business sides of SXSW, this festival features acts ranging from country, rap, rock, and reggae, all rocking the stages of various local bars, venues and streets of Austin. Past SXSW’s have seen acts like Muse, Depeche Mode, Vampire Weekend, The Black Keys, Prince, and MGMT. No matter where you are here, you’re never too far from a great show.

As we begin preparing ourselves mentally and physically for SXSW, we can also start planning out which bands will be on our “must see” lists earlier than ever this year. The first round of artists confirmed to play include London Grammar, Black Taxi, Shakey Graves, Los Lonely Boys and many more. To see the full list check out the official SXSW website here. Many more bands are still to be announced so keep checking back to see if your favorite bands have been confirmed!