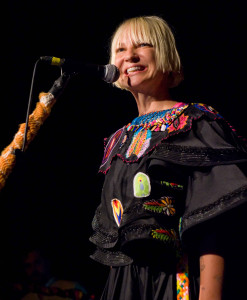 Sia Kate Isobelle Furler or better known by her stage name Sia, began her musical career back in 1993. Originally from Victoria, Australia, this singer/songwriter’s sound has been described as contributing to many different genres including: alternative rock, pop, soul jazz, and trip hop. Furler has received great recognition for her music especially for her writing. She has written for big name artists such as Christina Aguilera, Beyonce, Eminem, David Guetta, Celine Dion, and many others! Furled has released a total of 6 full-length albums including her latest album 1000 Forms of Fear, which features her new hit “Chandelier.” The track is an empowerment song about standing up against fears and those who put you down. We hear this in lyrics “I’m gonna fly like a bird through the night, feel my tears as they dry, I’m gonna swing from the chandelier, from the chandelier.” Overall the song is loud and melodic with Furler’s range in vocals and hip hop beat. It is an upbeat positive song that anyone can relate to. “Chandelier” and 1000 Forms of Fear are currently available on iTunes and Spotify.

Check out the official music video for “Chandelier” here!