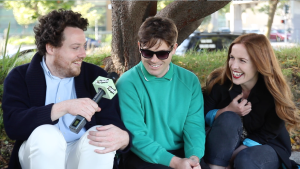 English band, Metronomy, released their latest album, “Love Letters” in March 2014, which captures the band taking a different direction from their signature synthpop sound. The album was recorded at the Toe Rag Studios in London, where many have gone to capture their work using the studio’s analog-only equipment. The White Stripes had recorded their album, “Elephant” there prior to Jack White building his own studios. The band recently spoke with B-Sides host, Pete Mar, about their latest album, thoughts on the World Cup, their guilty musical pleasures and more.

The band’s singer/songwriter, Joe Mount said that the experience to recording the new album was to create a challenge and push themselves to make new music that was interesting and different. Relating to the album’s throwback sounds and influence from the 60s, the various band members spoke about their early musical leanings towards artists that may not seem like the coolest. Olugbenga Adelekan spoke about how he favors Fleetwood Mac more than DJ Shadow even though it may not be deemed “cool”. Joe Mount spoke about how he recently sang “Orinoco Flow” by Enya during a recent karaoke night out and drummer, Anna Prior mentioned how she has a soft spot for music by Sting.

The World Cup was also a topic of conversation as the band spoke about who the most knowledgable is and more. Check out the interview!