The second day of the Austin City Limits 2014 weekend one was quite perfect as the weather was warm but not too hot, even throughout the evening and also musically. Estimated figures have counted approximately 75,000 people during Eminem’s nearly two-hour headlining set that had an array of both older and younger fans alike mouthing the words to nearly every song. The set was packed with nostalgia for many who were in their formidable teen years when Marshall Mathers broke out in the late 90s. The singsongs were nearly non-stop throughout “White America”, “Kill You” and “The “Way I Am” and a medley of some of his collaborations with Rihanna, “Love The Way You Lie” and “Monster” and “Airplanes(Recovery)” with B.o.B. and Hayley Williams of Paramore. The legendary rapper ended with “Lose Yourself,” with fireworks punctuating his status as one of the most prolific rappers in recent memory. 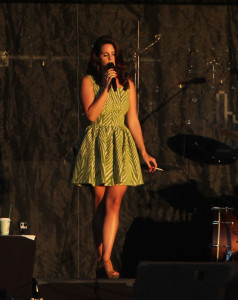 In a total 180, leading up to Eminem on the same stage just prior was Lana Del Rey. The songstress had the perfect scenario of the sun setting upon her to provide the perfect lighting. Starting the set by going into the crowd to say hello, take selfies and sign autographs, Del Rey was gracious and composed throughout. The singsongs to recent hits such as “Summertime Madness” and “West Coast” was prevalent amongst both guys and girls, demonstrating her wide appeal.

Iggy Azalea had an overpacked audience for the smaller stage that promoters booked her on, most likely before her overwhelming success. The Australian hip-hop performer had the attention of the younger crowd throughout her set that included “Don’t Need Y’all”, “Pussy”, “Work” and of course the mega-radio hit smashes, “Problem” and “Fancy”.

Other standouts during the day included The Head & The Heart, who commanded a large active crowd dancing and singing to songs like “Sounds Like Hallelujah” and “Rivers & Roads”. Trombone Shorty & Orleans Avenue played earlier with immense energy, working up the crowd that had just gotten into the festival. Interpol had a large crowd that had many of the day’s other performers watching in the audience as the band showcased new material from their latest album, “El Pintor” as well as classics from their breakthrough “Turn On The Bright Lights”.

Check out the photo highlights!