Albums You Need To Own

Taylor Swift released her fifth studio album “1989” last week, and with it, she swiftly(sorry, had to) pulled her entire music catalog from Spotify. Artists are no stranger to demonizing the music streaming app, blaming it for contributing to the decline in album sales in the biz but, not even Spotify or piracy could stop the almighty T-Swift from shattering expectations; selling more than a million copies in her first week. The pop starlet claims that the move is in defense of music, which is a rare commodity that deserves the money it asks listeners to pay for. This got us over at B-sides thinking, while maybe not all albums are worth every penny, there are certainly some essentials for your collection; so we picked five you’d be a fool not to have.

The Beatles – Abbey Road – You’re pretty much obligated to own a Beatles album. It’s a punishable offense in the music world not to own a Beatles album, even if you don’t like them, if that’s even possible. Any album by the Fab Four would probably do but, their swan song seems like an appropriate choice. “Here Comes the Sun” and “Golden Slumbers” are stand-out tracks if you’re listening on vinyl. Plus, that album cover? Possibly the most iconic photograph in rock history, if not history as a whole.

Foo Fighters – Wasting Light – Dave Grohl is a champion of the old school playing nice with the new school, as well as making sure everyone knows rock isn’t dead. Amongst his many efforts to preserve the way things used to be, Grohl and Co. have fondly stuck to recording their albums on analog tape, as opposed to the current industry standard of digital recording. This pretty much ensures that Wasting Light is an essential album to play on vinyl. They recorded it in Grohl’s garage, birthing an album that showed the band more perfectly in sync with each other than ever before. Bonus Points: Early copies of the album came with a piece of the analog tape they recorded the album on, and you could probably still find one online somewhere. 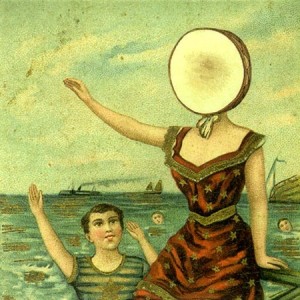 Neutral Milk Hotel – In The Aeroplane Over The Sea – Something about acoustic instruments beg to be played on record. The same could be said for Neutral Milk Hotel, whose surreal lyrics and unique sound seems more well suited for a more intimate setting, like headphones in a record player in your bedroom, as opposed to your iPod whilst on the go. Not to say they don’t sound great any which way you play ’em but, this album is definitely one you’ll be happy to have in your collection. The artwork is about as inexplicable as the music itself, and is guaranteed to have people unfamiliar with the band inquiring about the album. They’ll soon thank you for showing them their new favorite band.

Kanye West – My Beautiful Dark Twisted Fantasy – Good luck leaving Kanye West off of any required listening list nowadays. In the words of the article inspiring T-Swift, (who might not be stoked to be used as a defense for the guy who stole her moment,) “Haters gonna hate, hate, hate, hate, hate.” The man may claim to be a God, and you probably disagree but, it’s hard to argue that he’s not one of the most brilliant musicians of all time; and this album is his magnum opus. Layered infinitely with vocals upon vocals, instruments upon instruments, samples upon samples, Kanye came back from a brief Howard Hughes-esque stint locked up in his house, to emerge with what is surely the most epic hip-hop album of all time. It’s a must hear, must own, must play on your record player and leave it there for at least a week kind of album.

Ryan Adams – Heartbreaker – Back to that whole acoustic instruments begging to be played on vinyl argument, Ryan Adams is pretty much the modern day king of acoustic rock. After disbanding from Whiskeytown, Adams went solo, releasing this instant classic. The album boasts songs that sound like they were written around the same time as rock legends such as The Stones, Neil Young, and Zeppelin, with a swagger that had been lost for some years before it’s release. Not many artists enjoy such an incredible career as a solo artist but, Adams owns it, and while he’s gone on to make plenty of other incredible albums, none seem quite as sincere as his debut. Plus, that cover is just badass.


Ryan Adams - Come Pick Me Up

What do you guys think? What albums are necessary in a collection? Let us know in the comments!