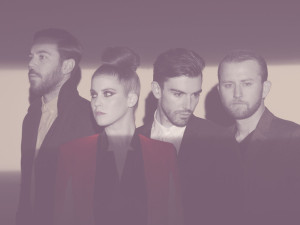 Hailing from Los Angeles, CA, the indie rock pop group Milo Greene have released their sophomore album, Control.  The group succeeds with the change in sound with this album, favoring synthesizers and a dance-vibe, a notable departure from their initial folk rock sound on their debut. Their new sound has been described as taking on a dark pop makeover, and it’s easy to see with a skilled layering of studio synth electronics mingled with the edgy, rock and roll undertone that defines their sound.  The four part harmonies throughout the songs take on a quality reminiscent of catchy ’80s pop that make them fun and fierce, the type of tracks you’d play at your next dance party.

That ’80’s pop sound is prevalent in the track “On the Fence,” with a fast-paced electric keyboard melody playing over a steady, thumping drum beat, all tied together by Marlana Sheetz’s sugary sweet pop queen vocals.  The dark part of the makeover comes in with sexy, mysterious lyrics like “I conform/How is it that you’re never forlorn…From now on I won’t try/I’ll just be your white lie,” giving a sense of danger within a relationship in turmoil.  “White Lies” can almost hide the very essence of the song with its dance-along beat, which is exactly its intentions.

While the harmonies are precise and completely on point, at times they can be overwhelming, as the singers come together to create one massive voice throughout the entirety of each track. With all the clean production, synth instrumentals and bouncing-off-the-wall beats, its easy to go overboard with that technique.  The tracks would have benefited from allowing each voice to have a moment before coming together as one, giving the songs a chance to breathe and grow.

Overall, Milo Greene avoided the dreaded “sophomore slump” and created a fun indie pop rock album that fuses future studio production quality with the past’s charming simplicity of music you can just dance to.  It’s definitely a record to put on when in the mood to let loose, and you can purchase it here here!