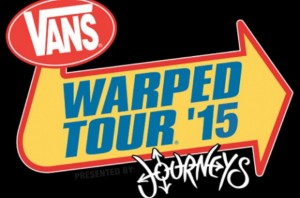 Summer is synonymous with a lot of things; ice cream, the beach, and vacation to name a few. Probably one of the biggest is summer camp, and the music scene’s version of it kicks off this week with the 20th annual outing of the Vans Warped Tour. It’s almost a rite of passage in the scene to either attend or play the festival at some point in your life, as it’s got a little bit of everything, and tends to be the jumpoff point for a lot of bands that end up blowing up. Paramore, Fall Out Boy, Blink-182, hell even Eminem and Katy Perry have been on Warped Tour. We sifted through the bevy of artists this year, and picked a handful you’d be a fool to miss.

1. The Wonder Years – These guys are the kings of pop-punk currently. With songs featuring complex and catchy instrumentation behind vocalist Dan Campbell’s incredibly personal and heavy lyrics, they deserve the crown. Even mega-music critics Rolling Stone and Pitchfork have featured these guys a few times, and with a new album on the horizon, here’s your chance to hear some new songs before anyone else.

The Wonder Years - There, There (Official Music Video)

2.
PUP – Drake’s not the only guy from Toronto with problems. These four guys bang away at their instruments like the best of ’em, and their debut album begs to be played in a live setting. The band is getting a reputation for being one you should see live, so it’s really a no brainer.

Matchbook Romance – These guys are one of the oldest bands on the roster this year, and that super bums me out, cause it makes me feel old as shit. Aside from that, these guys also just go back together. The verdicts not out on whether or not they plan on making any new music but, they’re sure to play plenty off their criminally underrated sophomore album “Voices.” And “Promise,” obvi.

Pvris – Ever wonder what Paramore would sound like if they went through an industrial goth-pop phase? Yea, me neither but, it’s actually really fucking good. Don’t be surprised if they end up being the next big thing, and you end up kicking yourself for seeing them before it was with binoculars.