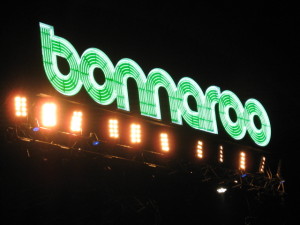 Bonnaroo 2015 was controlled chaos that spanned through 4 days of non-stop music. More than 80,000  fans came out to the 700 acre farm to sweat across 10 different stages for over 150 artists. This year, the top EDM headliners were only some of the biggest names- DeadMau5, Bassnectar, Odesza, and Flume among others.

A few years ago, the only EDM that you could catch at Bonnaroo would be from vendors that were brave enough to blast music from their own mini speakers and makeshift turntables. As these vendors got more attention, and the crowd around the shops began to grow at an exponential rate, Bonnaroo decided to do what it does best- give the best musical experience to its fans. Bonnaroo 2015 music and arts festival fully embraced electronic dance music into its experience.

The hippie fest welcomed with arms wide open sets by Tycho, Caribou, SBTRKT, Gramatik, Rudimental and other electronic based artist that mostly performed live sets. Of all the artists, the best performances were by performed STS9 and Bassnectar.  Chills ran through the crowd as STS9 performed under an impressive light show euphorically twisting behind the live band and glorifying vocals.  Bassnectar threw in some new songs from his upcoming album “Into the sun”. His set was soul food consisting of beautiful melodies that collided with the dirtiest bass as psychedelic visuals created a story in the background. The crowd at each performance made up a sea of lights as thousands of glow sticks flew from all over the place each time there was a climatic moment.

Compared to past performances, DeadMau5 had a not so special yet decent set that incorporated a couple of throwback tunes. What was impacting about his performance was the location of the show. Never before had an EDM artist performed in the mainstage of a Bonnaroo Festival.  The realization that only five years ago, Kaskade had not been able to gather more than 50 people on a side stage while this year an EDM act was on Main Stage gave a powerful message.

Apart from the main stages, the semi-new Kalliope stage stood above the rest.  Like a lightbulb for bugs on a nice summer night, the art deco car featured lasers, 70,000 watts and fire that could deter anyone within its radius to robotically walk towards the party. With surprise guests all weekend, the stage was the main attraction every night until way past the sunrise. On the Saturday of the festival, Mija made a surprise appearance with Jai Wolf after a one year anniversary of her legendary sunrise set with Skrillex. Thanking her fans for her growing success within the past year, she announced to the crowd that they would be the “first to hear” her newest collaboration with Major Lazer. Cherub joined the party and the dancing continued well after the sun rose as a Bonnaroo remix of Doses and Mimosas blasted through the farm.

With the high demand for night life across the farm, Bonnaroo featured several other venues solely dedicated to the genre. Bigger than ever, the Silent Disco featured the Red Bull Academy who brought some of its most talented Disk Jockeys along with Bonnaroo residents. Snake and Jake’s Christmas Club Barn had people zigzagged in lines to get into the small winter wonderland venue that hosted a tiki disco and a 90’s rave theme night staying open until past the sun rise.