After a fourteen year hiatus, the Doctor is finally back with a brand new album.  Compton  will be the third and final album in the legendary career of Dr.Dre.   This album was announced as a surprise earlier this year after Dre announced that he will be scraping the long awaited Detox, which has been slated to release for thirteen years.  The tracklist features a huge list of big name  collaborators including Jill Scott, Kendrick Lamar, Eminem, Snoop Dogg, and many more.  This album resembles Chronic 2001 as it includes a lot of features to showcase over Dre’s masterful  producing. 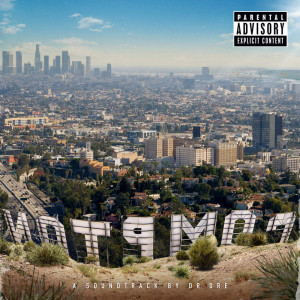 The production is loud and in your face, with  bass heavy layered instrumentals.  As a cohesive project, it welcomes us into Compton in the albums intro and slowly takes a tour through the social injustice and poverty the city currently faces.  Many of the instrumentals are accompanied by one of the many soulful  singers on the album like Jill Scott, BJ the Chicago Kid, or Anderson Pakk. Dre’s production is crisp throughout the entire project and some of his best work in terms of production comes on songs like “Deep Water” and ” Darkside/Gone”. Dre has a special gift for bringing out the best in artists with his beats and this album is no different.

Some of the biggest rappers in the game make an appearance on this album, and the verses from these superstars did not disappoint.  Eminem, Ice Cube, Kendrick Lamar, and Snoop Dogg all deliver some of the  best verses of their careers, clearly bringing their A-game out for the legendary  Dr.Dre.  While Compton serves as a spotlight for the stars to shine it also plays the part of a platform for unknown artist to break out.  Justus, King MEZ, and Jon Connor are three names that seem as if they all got the Dr.Dre approval before anyone else’s, as they showcase their talent on multiple songs on  the project. In the Same light singers Marsha Ambrosius  and Anderson Pakk are given the same stamp of approval on the album. Those are a few  names to definitely keep an eye out for, as they played a huge role in creating  a lot of great songs on this album. On this project Dre spits some of his most energetic bars  since The Chronic  and proves to any doubters that he can still hang with the young rappers in the game.

The content on this album ranges in topics but has a central theme on both revealing the tragic state the city of Compton is in as well as giving a look through the past from the eyes of the man who helped create it all. on “It’s All On Me” Dre sounds nostalgic as he raps Face down on the pavement with the billy clubs/ Took that feeling to the studio and cued it up/ And now it’s “Fuck the Police” all up in the club/Now it’s ’91 and Snoop Dogg came to visit/And was like “What up cuz? Let me show you what this chronic like”.  On “Animals” his attention is given back to the corrupt system  as he raps, But I’m a product of the system raised on government aid/ And I knew just how to react when it was time for that raid/ Just a young black man from Compton wondering who could save us/ And could barely read the sentences the justice system gave us .

With the movie Straight Outta Compton coming out in a few days, Which Compton acts as the movie’s soundtrack too,  It looks as if Dre may be at the pinnacle of his truly amazing career. Now a billionaire thanks to his successful Beats Headphones line, Dre is set to sit back and continue paving the way for future starts to shine. This final album is a token of gratitude from one of the most legendary names in hip-hop and fans can now rejoice in the fact that a new Dr.Dre album is finally out.