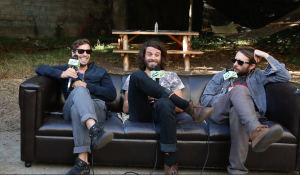 Good Old War is back with a new full-length studio album – Broken Into Better Shape that was released on June 30. The album was recorded in Nashville with the help of Grammy Award winning producer Jason Lehning (Alison Krause & Union Station, Mat Kearney, Dolly Parton) and mixed by another Grammy winner, engineer Vance Powell (Jack White, Houndmouth, Elle King). The album is the band’s fourth full-length release and the first that finds the group working with outside songwriters. The trio originally started working on the new album after wrapping months of touring in support of their previous release, Come Back As Rain (2012). During this initial phase, drummer Tim Arnold decided to leave the band to join his fiancé in Atlanta who was pregnant with the couple’s first child. Keith Goodwin and Dan Schwartz found themselves with half an album and decided to take the opportunity to experiment working with outside writers and producers.

B-Sides On-Air met up with Good Old War, where the band performed an acoustic version of “Tell Me What You Want From Me” exclusively for B-Sides. Original drummer Tim Arnold was performing with the band, and B-Sides spoke with them at The Independent in San Francisco to talk about the new album and more. Check out the interview: