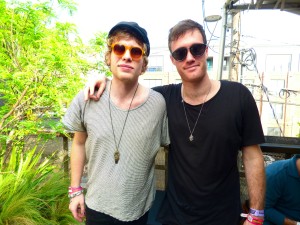 Jimmy Vallance and Tom Howie were classmates at their Vancouver high school, but it wasn’t until pursuing separate styles of music that the duo came together to form Bob Moses, the best of a DJ and a rock band. Their Days Gone By debut was released last September and the duo have steadily become a must-see at festivals. Howie and Vallance sat down with B-Sides at SXSW to talk about music, Vancouver, the upcoming festival season and more.

You went to high school together before later reconnecting to form Bob Moses. Do you ever look at each other just like ‘wow, we made it.’
Jimmy: I don’t feel like we’ve ever felt like we’ve made it made it, but it’s like, ‘wow I can’t believe I’m doing what I love with a buddy from high school.’
Tom: It’s kind of weird because we’ve been best friends now for 5-6 years since we started working together. It’s kind of hard to remember a time when we weren’t best friends.

You guys were working in different styles of music. How do you work together to compromise those styles into the Bob Moses sound?
JV: We both come from band backgrounds, so we both started doing rock music and song writing. I started DJing around the same time and when we got together our goal was to mash the two together. It took a little bit of time to actually do both justice. It took us like a year of trying every day to get it right, it was just patience and trying different production styles and different techniques.
TH: It’s not so much like I was a songwriter and a rock guy and Jimmy was a DJ. We came together and we both had a vision. We can both do both things. We do DJ sets sometimes and write songs. It’s an involved process.

You’ve described your music as melancholic with a little bit of hope at the end.
TH: We like moody, deep brooding music. We also grew up in the Pacific Northwest. We just did an Essential Mix and put a bunch of stuff from young, up and coming artists in Vancouver. We were driving around one night just to make sure it was ok, like in and the car, and Jimmy was like ‘growing up in Vancouver, you understand why people make music like this.’ It definitely has a vibe and that kind of works its’ way into our music. I feel like writing lyrics is kind of like a cathartic process for us. It’s almost like you’re writing to work stuff out from within yourself. We are hopeful guys so there is always a bit of hope at the end.

So if you had to pick your one favorite song of all time, what would it be?
JV: I think we’ve both always said “In My Life” by The Beatles. It’s just a great song. It’s happy and it’s sad

What are you currently listening to right now?
TH: Everybody fell in love with the Tame Impala record this year. That’s one of our favorites. We’ve been listening to his guy Harrison Brome from Vancouver, and the Pender Street Steppers from Vancouver, they’re really great. We’ve been on a really big Roman Flügel kick and we played with him in Miami actually a couple nights ago. Tons of stuff, it’s all over the map.

What’s your favorite festival you’ve played at?
TH: For me the favorite is still Burning Man. It’s not really a festival. It’s a festival but it’s not a festival. There’s no wristbands, there’s no set time. It’s very free. It’s a bit of a shit show in the sense that its disorganized but something amazing always happens there.
JV: That is the glue that keeps it together, the disorganization. That’s what makes it magic.
TH: It’s a magical place. It’s not like playing a music festival where you have a contact and all that stuff. It’s a magical experience and I think everyone should go.

What’s the festival you most want to play at?
TH: That’s it (Burning Man).
JV: Coachella. That is a big goal. The fact that we are doing that, that’s insane.
TH: Here (SXSW) though, we just want to kill our show, have a good time and eat some killer barbecue.