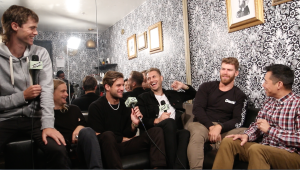 Australian band, The Rubens may hail from the small town of Menangle but their sound is big and packed with catchy melodies and interesting lyrics. The five-piece consists of three brothers, Sam Margin, Elliott Margin and Zaac Margin, along with Scott Baldwin and William Zeglis. The band experienced great success in their home country with their platinum-selling debut album and awards for the single, “My Gun”. The Rubens are back in the U.S. with their follow-up album, Hoops which lead singer Sam Margin stated, “We started writing almost straight after the first album came out. We had 15 songs when we went in to record the first album, this time we had almost 40.”

B-Sides caught up with The Rubens during their San Francisco tour stop to talk about the task of writing material at a beach house for five months, their interactions with previous tour-mates, Grouplove and more.