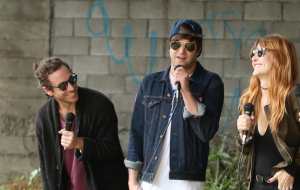 Southern California band, The Mowgli’s are putting the finishing touches on their yet-named forthcoming album due later this year. The six-piece group released their single “Freakin’ Me Out,” earlier this year and are playing select dates throughout the summer. Their debut album, Waiting for the Dawn (Photo Finish Records) premiered at #4 on the Billboard Heatseekers Chart and yielded the group their first hit song “San Francisco.” Their sophomore album Kids In Love included the feel-right summer song “I’m Good,” originally written for an anti-bullying campaign.

The trio of Colin Dieden, Katie Earl and Josh Hogan from The Mowgli’s were kind enough to perform the track, “Monster” acoustically from their upcoming album for B-Sides On-Air during their San Francisco tour stop. They also gave a few hints of what to expect from the new album and more. Check out the interview: