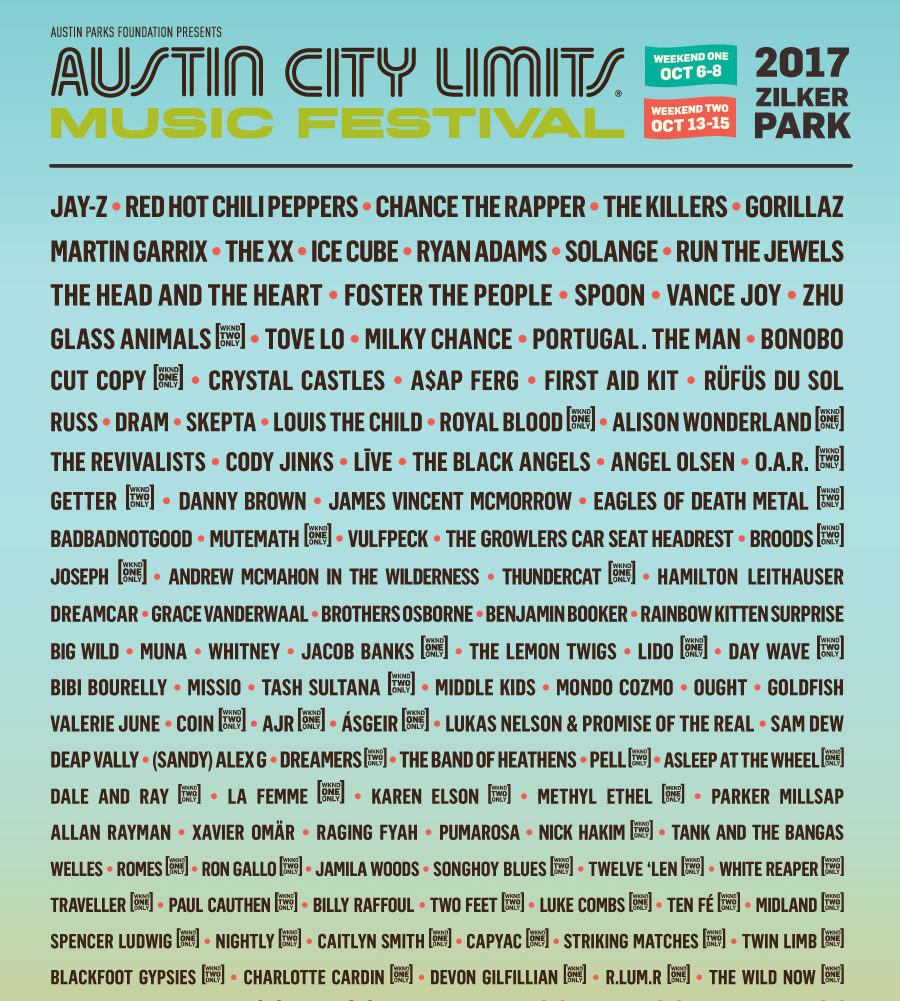 The Austin City Limits Music Festival is going on right now, as well as next weekend, with a fine array of diverse acts for every kind of fan.  And… while B-Sides is there and pumped to see them all, we also have a few that we are more than stoked to see. Below is a list of those 10 artists. Cheers and Raise Your Glass!!

Britain’s Glass Animals released their debut album in 2014 combining a pop heavy indie rock sound with an electronica underbelly. Their last record How To Be a Human Being was released in 2016.

Live formed in the tiny town of York, Pennsylvania, and was quickly catapulted into superstardom in the mid-90s  with the global smash Throwing Copper. The band’s original lineup was on a brief hiatus before reforming in 2016.

Deap Vally, from California, blend blues based 70s style rock, with bass heavy scuzzy punk to form a sound that is part Black Sabbath, part The Stooges. The band has released two studio albums with the last, the wonderful Femijism, in 2016.

Dreamers are the purveyors of an indie pop sound that resonates long after the listener has  turned off the radio. The trio from New York takes the Austin City Limits stage after releasing the critically acclaimed This Album Does Not Exist in 2016.

From the college town of Boone, North Carolina, Rainbow Kitten Surprise combines tight harmonies with an indie rock sound and introspective lyrics. The band tours extensively and offers a live show that you won’t want to miss.

For all of you that like a good barnyard hoedown, the Blackfoot Gypsies have what you are looking for. Bringing a blend of bluegrass, punk, and blues inspired songs, the band has garnered a following in their hometown of Nashville and around the US with their extensive touring.

The Blackfoot Gypsies "Potatoes and Whiskey"

Simon Green has been performing under his moniker, Bonobo, since the late 90s. Green has released six studio albums of deep electronica utilizing tribal rhythms and trance inducing beats. Bonobo released its latest album in January, 2017.

Pumarosa are London’s best kept secret combining pop sensibility with alt-rock leanings. The band has the knack of utilizing open space as another instrument with pensive lyrics and singer Isabel’s soaring voice. A must see at ACL.

Liz Cooper and the Stampede

Nashville’s Liz Copper and the Stampede bring a slow, burn blues and soul that is rarely found within a trio. Their sound makes them larger than they really are, but coupled with an intense and intimate mellow that is all their own.