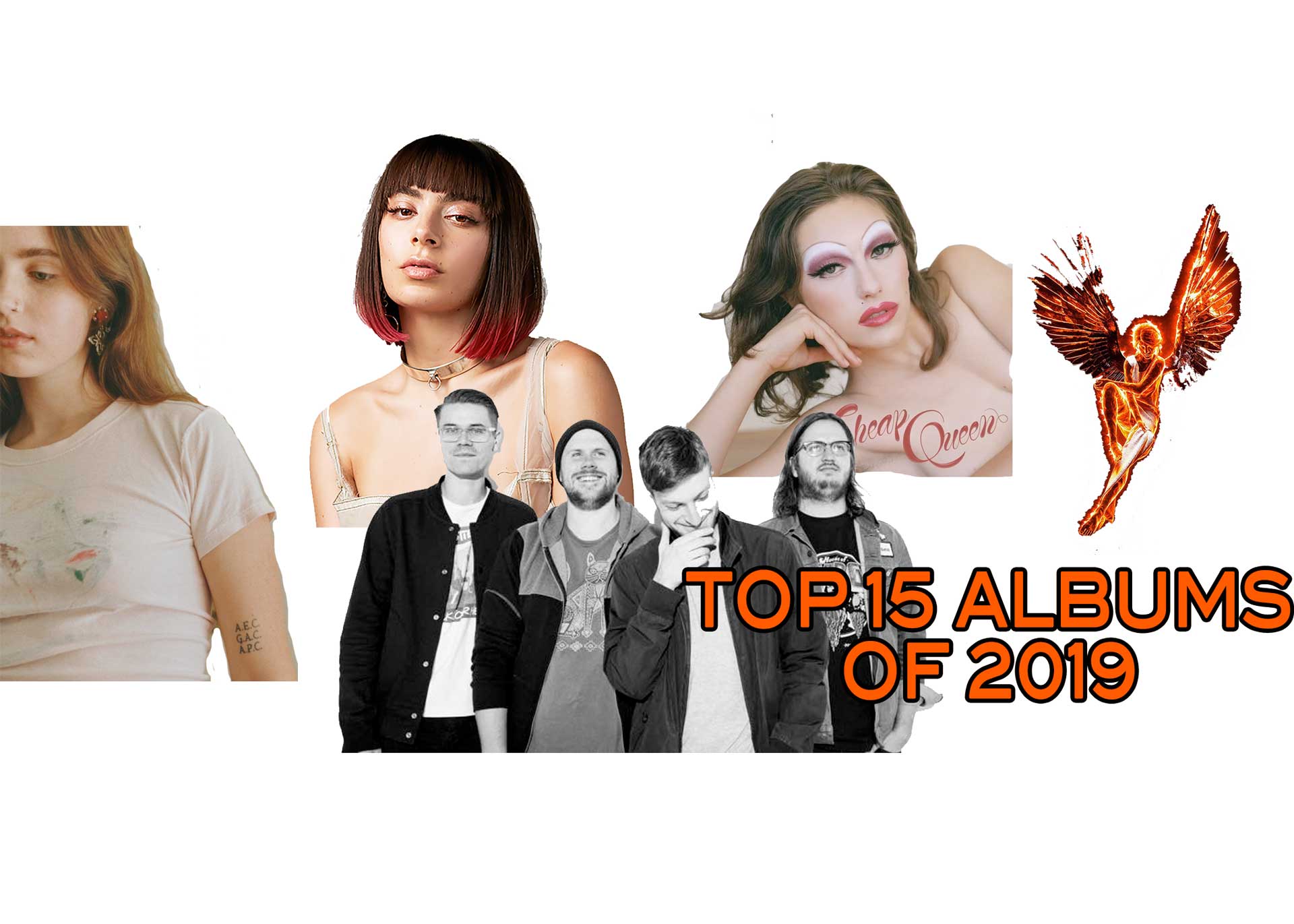 Even in the current age of streaming music that facilitates the singles-based model, the album concept continued to thrive in 2019. Numerous artists have been keen on presenting a full body of work whether it be via a common theme amongst the songs or just a cohesive sound that ties the batch of songs together. This was overwhelmingly evident in new music from veterans like Vampire Weekend and Lana Del Rey. On the flip-side, there were strong debuts in `19 by Billie Eilish, Clairo and King Princess, who showed an incredible future ahead of them. Our list of the top 15 albums are more our favorites and many of which are more than just a collection of songs.

Canadian band Pup dropped their fifth album Morbid Stuff this spring and instantly resonated with themes of the realism of living in a post-recession world. The songs are in-your-face loud like in “Full Blown Meltdown” and “Free at Last”, while accompanied by lyrics of the frustrations in dealing with layoffs and debt, as detailed in “Scorpion Hill”. Political rock isn’t as prevalent as it was in its heyday when bands like Rage Against The Machine and System of the Down were at their best, but Morbid Stuff shows it’s still out there and can still hit home to motivate and inspire.

When Australian artist Alex Lahey burst into the music scene in 2017, she brought a refreshing sound and incredible knack for creating catchy tunes. On her sophomore release, ‘The Best of Luck Club’, Lahey is honest and straightforward in her telling of the emotions of romance and the trials and tribulations of finding one’s self as a young adult. “I Don’t Get Invited to Parties Anymore” is an anthem filled with tales of twenty-somethings and “Black RMs” is an queer love song that only Lahey can tell. “Don’t be So Hard On Yourself” combines Lahey’s flare for power pop featuring a full-blown sax solo that is reminiscent of those early 80s rock songs where sax solos were ubiquitous. It’s these nuances that make ‘The Best of Luck Club’ an easy listen every time that one can never tire of.

Alex Lahey - Don't Be so Hard on Yourself

The pairing of Conor Oberst and Phoebe Bridgers had lots of music fans eager to hear what the two would sound like on their collaborative effort as Better Oblivion Community Center. Their self-titled album was met with rave reviews as the work showcases each of the artists’ strengths. Oberst has been tackling topics of anxiety, depression and sadness, while Bridgers had taken her real-life experiences of loss and growing pains. ‘Better Oblivion Community Center’ tells stories revolving around these topics and also allow for some amazing harmonizing. Tracks like “Dylan Thomas”, “Chesapeake” and “My City” capture the listener’s attention simply brought forth by the delicate vocals of Oberst and Bridgers. ‘Better Oblivion Community Center’ showcases two artists who are perfectly suited to tell the type of sad stories that will continue to resonate over time.

The album Ginger is the group’s fifth studio release in less than three years and they’ve stated that it’s their favorite thus far. It’s clear as to why Ginger has resonated with Brockhampton. After writing 100 songs for the album, only twelve were kept and the ones that made it evoke the feelings of dealing with fame and relationships. “Sugar” touches on the aspects of love and is a major highlight on the album along with “Love Me For Life”, “Boy Bye”, and “No Halo” that showcases the collective at their best, rapping playfully against catchy melodies.

11. The Japanese House- ‘Good At Falling’

After a handful of EPs over the past few years, The Japanese House (Amber Bain) finally released her debut Good At Falling to much anticipation. Good At Falling showcases a mix of synths, trance-like guitar blends, and indie-pop that totally gets you lost in ups and downs of a relationship. Bain’s layered vocals are hypnotic while the music just sticks with the listener, notably in tracks like “Lilo”, “Maybe You’re the Reason” and the simple bare-bones “You Seemed So Happy”, the latter which many a heartbroken soul has gone through.

went to meet her (intro)

Assume Form from British singer/producer James Blake may feature many guest collaborators including Andre 3000, Travis Scott, and Rosalia but it’s the overall pop vibe with his most intimate thoughts in song that makes the album so good. Reflecting on the joy of being in love, Blake tackles the highs of enjoying the relationship like in “Lullabies for My Insomniac, as well as the anxiety of maintaining it in “Where’s the Catch”.

With her highly anticipated debut album, Cheap Queen twenty-two-year-old King Princess (Mikaela Straus) exceeded expectations and then some. After dropping “1950” a year earlier to huge mainstream radio airplay, there were high hopes for the USC graduate. With a batch full of songs ranging from folk-rock to sampled beats, Straus tackles topics of self-confidence and love that transcends gender. Featuring the aforementioned “1950”, ‘Cheap Queen’ is chock full of bops like “Ain’t Together”, “Hit The Back” and the emotional “If You Think It’s Love” that will certainly continue to resonate and populate playlists for years to come.

After creating a huge fanbase on Youtube, Clairo (Claire Cottril) released her highly anticipated debut album Immunity this summer. The album shows her growth from teenage viral sensation to future indie-pop star, shaking off any notions of being “just an aspiring internet singer”. While tracks like “Bags” and “Sofia” got much attention for their catchy melodies and insightful lyrics, others like “Impossible” and “Alewife” are intimate set against a dreamy electro-pop sounds that don’t sound dated.

Here Comes The Cowboy by singer and multi-instrumentalist Mac DeMarco is set against the backdrop of the Old Wild West. With songs emitting imagery of cowboys and the simple life, many songs such as “Finally Alone” and “On The Square” are adventurous and catchy while retaining that ‘DeMarco’ aesthetic.

The final chapter of his trilogy of albums, Ascend catapulted Illenium into the mainstream. His integration of multiple genres such as acoustic rock and indie were accompanied by relatable topics of love and heartbreak and introduced his music to a wider audience. Stand-out tracks “Good Things Fall Apart” with Jon Bellion and “Takeaway” featuring The Chainsmokers and Lennon Stella got major airplay on mainstream radio stations but there are many gems on the album, notably “Blood” with Foy Vance and “Pray” with Karmeron Alexander.

Charli XCX really went all out with her self-titled third album Charli. Every track features a different artist that includes Troye Sivan, Lizzo, Sky Ferriera, Haim, Clairo, Kim Petras and many others. She dropped her Charli after being hacked and her early demos were released, which turned out to be a blessing in disguise. The album captures the self-reflection of dealing with anxiety and dealing with relationships, all packaged in danceable, hard thumping electronic beats.

4. Vampire Weekend- ‘Father of the Bride’

Vampire Weekend’s fourth album Father of the Bride combines country rhythm with surf-rock vibes, hip-hop, and classical sounds. The album was a long time in the making and features collaborations with artists such as, Danielle Haim and Steve Lacey. Father of the Bride heightens positive feelings and shuns any form of negativity that brings the listener to attention rather than just providing a background soundscape.

The fifth studio album IGOR from Tyler, The Creator was the soundtrack for the summer of `19. The funky R&B aesthetics paired with the storyline of a love triangle makes this one of his finest works.

Dropping her sixth album Norman F*%king Rockwell via Interscope records, Lana Del Rey worked with producer/ Bleachers frontman Jack Antonoff. The record is a mix of pop, soft rock, and piano ballads that has fans listen to the album from start to finish.

1. Billie Eilish- ‘When We All Fall Asleep, Where Do We Go?’

Billie Eilish had built a strong fanbase with a handful of EP’s prior to releasing her debut album When We All Fall Asleep, Where Do We Go? The process was essential as it allowed her to stretch and experiment with different sounds that would eventually emanate throughout her formal introduction to the masses. Elements of hip-hop, pop and alternative are evident in one form or another throughout the album that features the pop-alternative “Bad Guy”, the dark vibe of “bury a friend” and the anthemic “you should see me in a crown”. The album will certainly provide a blueprint for many an artist for years to come.

WHEN WE ALL FALL ASLEEP, WHERE DO WE GO? (Full Album)