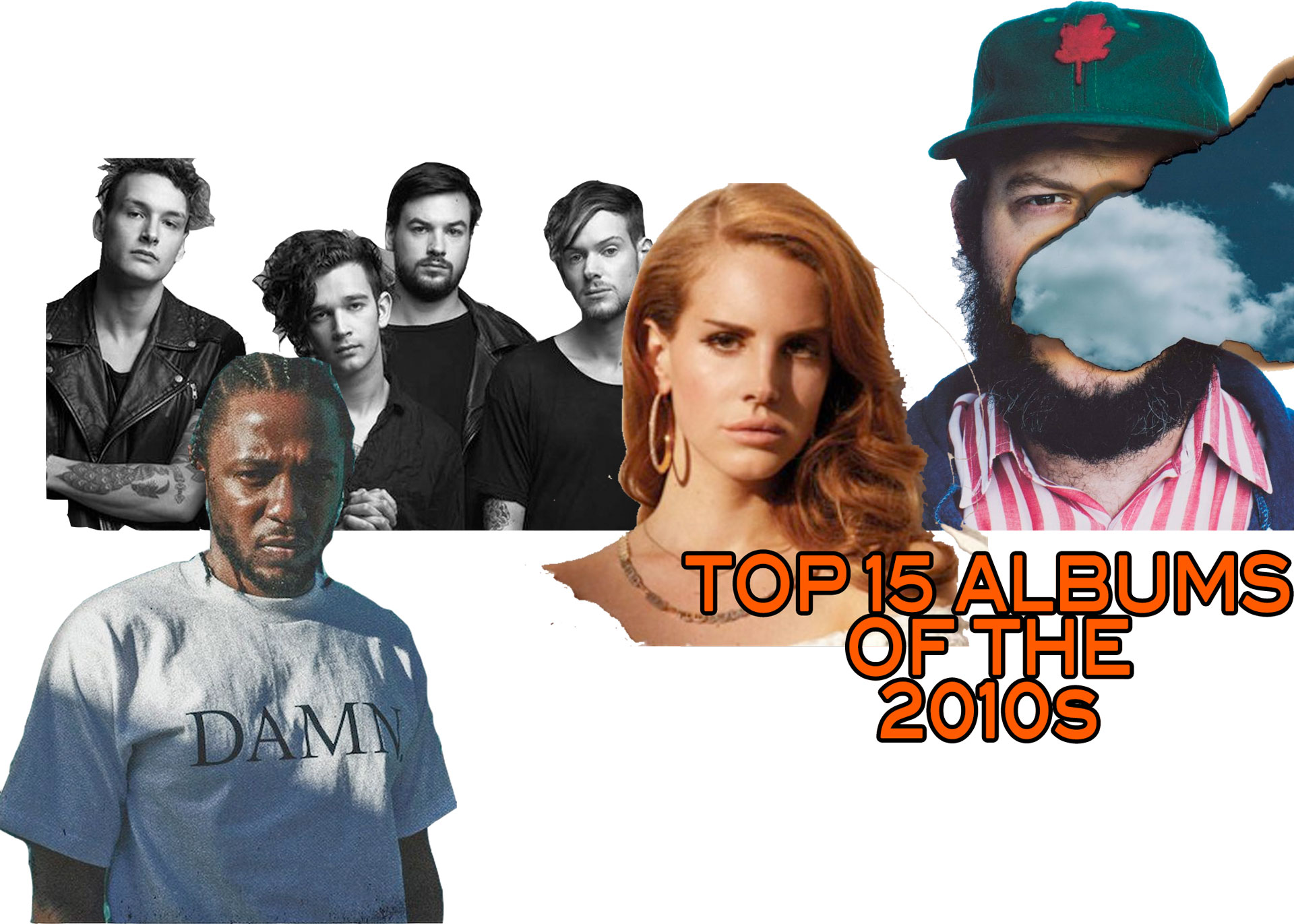 As the aughts gave us groundbreaking music with the rise of indie rock, blog-influenced bands and a period of emo bands, the 2010s provided a wealth of new music. The era of 2010-2019 saw the rise of EDM as Calvin Harris, Skrillex, Tiesto and Marshmello became household names, the shift into pop-alternative from artists like Imagine Dragons, Foster The People, twenty one pilots and The 1975 found mainstream success and hip-hop continued to remain strong from the likes of Kanye West, Chance The Rapper and Kendrick Lamar dominated festivals that were previously headlined predominantly by rock acts. Difficult as it was, we here at B-Sides narrowed down our top 15 albums of the 2010s. Check them out!

It’s been long enough. It’s okay everyone. The song is good again! There was a year long period where “Get Lucky” was more inescapable than the panic attack you get when you eat too many edibles. Not for nothing, the song is essentially the peanut butter cups of ear candy. The teaming of Daft Punk with Pharrell and Niles Rodgers was bound to produce magic, but there are other collaborations on the album that make it extraordinary. The vocals by Julian Casablancas on “Instant Crush” is the gravy to the mid-tempo track that’s hard not to listen to repeatedly, whereas “Doin’ It Right” featuring Panda Bear fits seamlessly next to their classic “Harder, Better, Faster” and is pure Daft Punk at its finest. Evoking various sounds from the 70s, “Motherboard” is an instrumental prog-rock vibe while “Fragments of Time” (ft. Todd Edwards) evoke that Steely Dan vibe that allow Daft Punk to stretch out and ease up on dance-heavy tunes they’re known for. ‘Random Access Memories’ is a cohesive timeless album that sees Daft Punk evolving and shows they have so much more in store for us.

Hayley Williams has never been particularly shy about laying it all out on the table when it comes to her feelings. Paramore’s self-titled album saw the band almost completely ditch the pop-punk inspired sound that got them famous, in pursuit of something not only more unique to them, but more digestible to a wide audience. After losing two of the founding members, and almost losing the band entirely, Williams lets it all out through a variety of tempos and feelings, but the emotional crux hangs on the mix of hope and despair displayed on “Last Hope.” The song is an anthem for people that feel like nothing’s going right, but push forward with the belief that things will sort themselves out. That sometimes the hurt is what inspires the joy. No matter how little you have left.

Horchata may as well be Vampire Weekend’s theme song. All eyes were on them to follow up their debut, and the success of “A-Punk.” Contra delivered, and “Horchata” defines the sound that they would so boldly embrace across their next two albums. Ezra Koenig’s vocals bounce in sync with the keyboard’s and xylophones in the quirky way that would be laughable in any other band’s hands. The tongue in cheek approach to their music has come to be part of their namesake, and this song encapsulates that better than just about any other song in their repertoire.

If you listen closely to the opening piano on Runaway, in the ringing out of each note, you can basically see Kanye sitting at the keys, wallowing in his loneliness. After making himself public enemy number one at the VMA’s, it was go big or go home, and boy dig we get something big. The best album of the decade, and possibly one of the greatest of all time, came seemingly out of nowhere. Every song is it’s own grandiose statement, it’s own motion picture, and Runaway is the essential centerpiece. It’s Kanye at his most Kanye. A self aware song about knowing that you’re the asshole, and apologizing for it, while simultaneously embracing it as what makes you you. When he turns auto-tune into a legitimate musical tool, and not just a quick fix, or shtick, it’s a moment that will never fully be captured again. Imitated but never replicated.

Kevin Parker is essentially Kanye West on acid with a guitar. This dude’s command of sound is one that would have driven Phil Spector down a whole different road of insanity. The Moment is all of his sensibilities on display, as instruments drop in and out at a rapid pace, before all surging back together at the perfect moment, like the audible equivalent of coming up on your favorite drug. The whole album Currents is a musical landscape, and The Moment is the X on its map.

When Arcade Fire released their third studio album, ‘The Suburbs’ in 2010, it was arguably the peak of the popular ‘indie rock’ scene. ‘The Suburbs’ took the anthemic melodies and the band was known for and made them sound big paired with mature topics of their observations of the aforementioned ‘indie rock’ scene and growth as people. ‘The Suburbs’ is one of those timeless records that people will more likely associate with the aughts than the`10s but a strong representative of the genre before the rock’s music shift in sound.

The self-titled album by Bon Iver saw Justin Vernon create new sounds based around his vocals that were lauded on this 2011 release. Boasting a myriad of interesting compositions like “Calgary” and “Perth”, “Holocene” is a delicate track that embodies the aspirations of the album and no doubt introduced a whole new audience for Bon Iver and inspired a slew of new artists.

Queen Bey released her fifth studio album at a time when memes were getting popular and the new music inspired new internet slang. Internet memes aside, the album is chock full of atmospheric R&B rhythms as opposed to the traditional song structures. “Drunk in Love”, “Flawless” and “Jealous” highlight the maturation of the legendary artist.

So there may be a theme here, but artists seem to be operating at their peaks when they’ve had their heart absolutely shredded by somebody else. “Somebody Else” sees Matt Healy perfectly encapsulating one of the greatest fears we have when a relationship starts to deteriorate, the thought of the person you loved finding someone else. The idea that you don’t want someone, but don’t want them with someone else, is so painfully honest, so emotionally selfish, and so incredibly human.

It’s Frank Ocean’s world, and we’re lucky to be living in it, even if we know scarce details about it. The man somehow manages to pour out so much emotional information across Blonde, whilst simultaneously remaining one of the most enigmatic figures in music today. Self Control is a prime example of what makes Frank stand out from his contemporaries, a devastating account of love lost with so much emotion, and so few details. When he croons before the bridge, with effects twisting his voice into an instrument unlike any other, it’s so wrought with heartfelt despair, if you’re not on the verge of tears, you might want to check your pulse.

Adele really did the damn thing with this album. The sheer amount of force in each of its countless hit singles make it almost criminal to pick the best one, but “Set Fire to the Rain” is a safe bet. It has everything you look for from a great Adele song, with absolutely crushing lyrics about lost love, beaming from her lungs, through a swell of strings and piano so cinematic, it may as well be the song James Bond dies to a thousand times.

Set Fire to the Rain

The second studio album by Wolf Alice beat any notion of a sophomore jinx and presented the UK band as one with the musical chops to explore various sounds. From the loud punk ethos in “Yuk Foo” to the dreamy synthpop of “Don’t Delete the Kisses”, the album takes the listener on a journey of varying soundscapes while tackling relatable emotions of love, loss, and uncertainty.

Few bands can maintain such a ridiculous level of consistency as Beach House has over the past ten years. Teen Dream’s opening track is everything that puts them in a class of their own, from the hypnotic looping guitar riff to the haunting vocal harmonies, and the inevitable swell into a chorus about as gorgeous as we’ve ever heard. By the time everything kicks in around the midway mark of the song, we’ve been taken on an album’s worth of an audible journey, and we’ve just scratched the surface of one of the decade’s best albums.

Lana Del Ray is the type of person that the term “old soul” was invented for. Her laid back approach, and the croon of a lounge singer on the verge of spilling her martini on the piano. Summertime Sadness would’ve been perfect in Baz Luhrmann’s “The Great Gatsby,” with a sound that dances somewhere between modern pop, and epic movie scores from the time of Old Hollywood. There’s just really nobody like her.

Nobody could’ve predicted Kendrick’s meteoric rise to hip-hop royalty, but Backseat Freestyle is about as good of an indicator as could have been. Kenny barely stops to breathe across the pulsing three and a half minutes of some of the best bragging done this decade. Honestly, who else could rap the lyrics “I pray my dick get big as the Eiffel Tower, so I could fuck the world for seventy-two hours” with such sincerity, without coming across as goofy? Nobody.