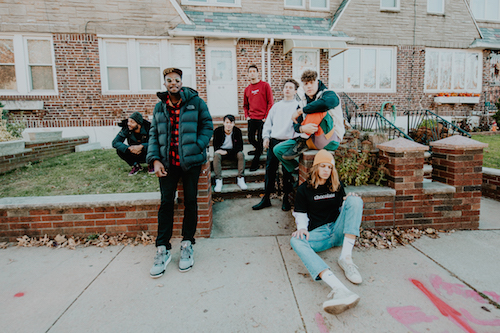 The seven members (Ben Stevens, Kamau Burton, Christian Rose, Dan Moss, Miles Clyatt, Rami El-Abidin, and Michael Ricciardulli) of the genre-bending band Juice originally from Boston relocated to Connecticut during this past quarantine. Juice caught up with B-Sides since we last spoke to them last year in San Francisco for their headline tour. Now with a canceled tour, Juice stayed creative in releasing new music like “Make Pretend” for their fans and we can expect more from their third EP.

Hey Juice! Thank you so much for your time today.

Being a group of 7 members & very close to one another. Did it add a level of anxiety to be away from the guys & to stop touring?

Christian: Yeah. It was heart-breaking when everything was closing down because of the virus. We had a big tour planned for the summer. We were gonna play at SXSW. It was a bummer to shut down, but at the same time, it has given us time to work on writing and figure out who we are. There have been levels of it not being a curse. I feel more creative and fresh now having a break from everyone.

How long have you guys been in quarantine together in Connecticut then?

Daniel: We just got in last week. Once the whole tour got canceled, before we came home we were in the studio and we recorded a lot of the songs that we’re releasing now. We were away for a couple of months so this feels new and we’re getting used to it again.

Congrats on the release of “Make Pretend”! You’ve said that it’s about the anxiety felt from lost love, but it seems relatable with the pandemic and even with the high tension of race relations. How do you deal with anxiety?

Ben: Wow that’s a good question! Rami you answer that.

Rami: I’ve just been trying to take care of my body as best as I can. I got into a routine yoga practice. It helps a lot. I drink plenty of water. I try to eat well. It’s been a huge improvement in my mental health. It’s been the first time we’ve ever focused on ourselves because it used to be focused on touring, writing, and that can be stressful. It was a nice pause.

Being a diverse group, how has the recent Black Lives Matter movement affected you guys?

Christian: As it pertains to what’s going on in the world.  As a group, we’ve all talked about what’s happening. How it makes us feel and how we want to contribute in ending some of the problems that protestors are talking about. How to better ourselves as a group of seven men who are all racially diverse. We all continue to talk, listen, and I think that has made us feel more comfortable and less anxious.

Interestingly enough, you’ve compared “Make Pretend” to “1994 Green Day meets 2004 Green Day”, – in what aspects? And how has Juice evolved over time?

Daniel: That was a snarky quote. We had a lot of influences on that song including 90s/2000s Alt-rock. So Green Day’s discography can be heard in a lot of aspects to the song including My Chemical Romance.

Ben: And The Click Five! (laughs) I feel more comfortable. As artists, we feel more comfortable taking risks, especially after this quarantine. We’ve been listening to a lot of things and digesting it. For a lot of those things, it felt like an exhale. So when you get stuff out of your chest like that, it opens the door for you to be more experimental. For all of us, it’s very important to be creators.

“Make Pretend” is the third new single released from you this year for your upcoming EP. Will the current events affect your songwriting?

Christian: I think right now everything is about Covid-19 and racial injustice. We’re over-saturated with stuff and it’s kinda hard to write about the moment because we’re living the moment. A few months from now, we’re gonna look back on our experiences and it’s going inspire ideas.

Juice just joined TikTok! What type of content should we expect from you?

Ben: Now we’re in quarantine and our shows are postponed, we have time to focus on TikTok. It’s going to be fun to see what happens!

Check out their quarantine performance of “Make Believe” that they did for B-Sides: