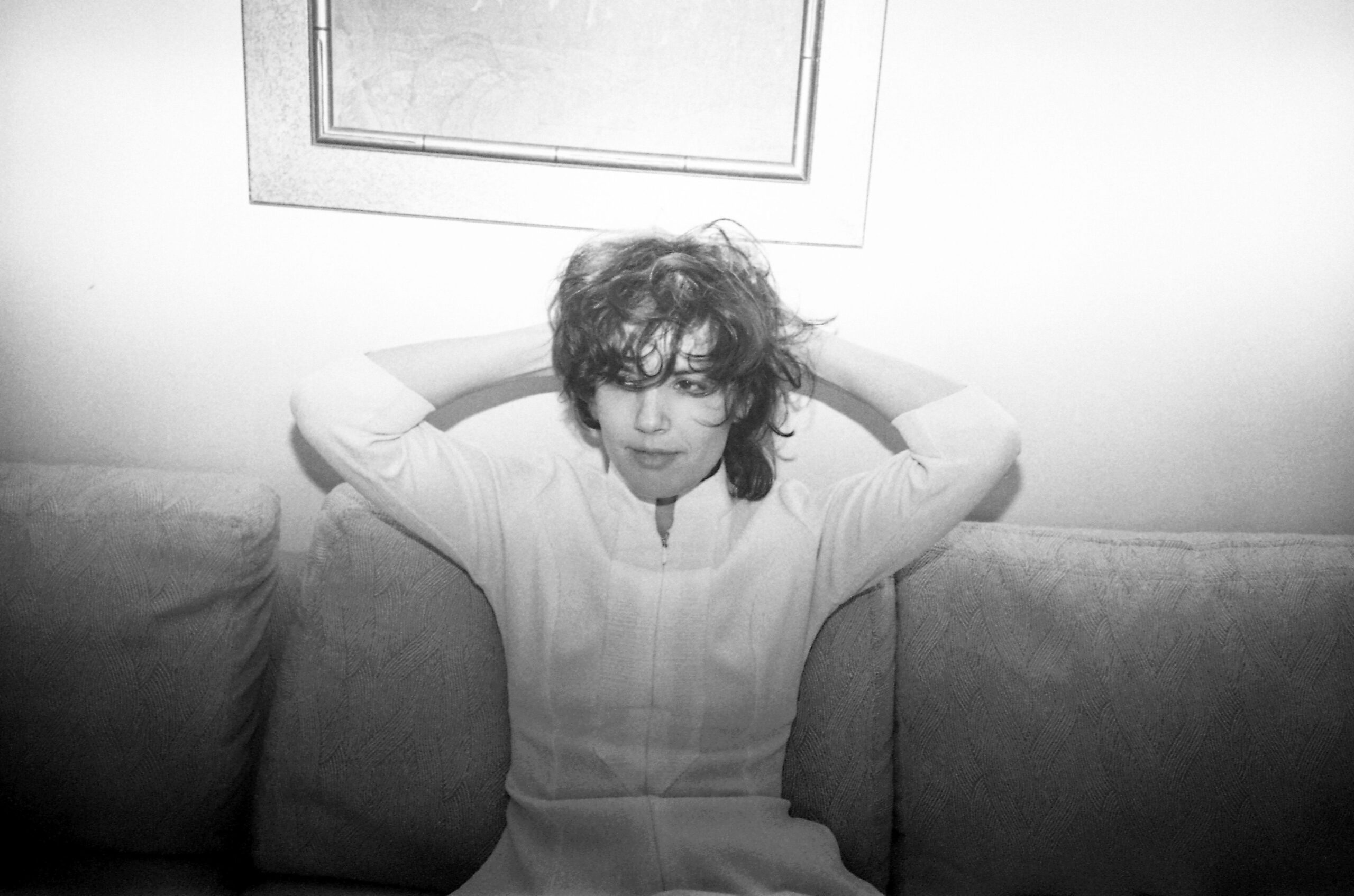 Nashville folk-pop artist Tristen just released her fourth studio album ‘Aquatic Flowers’ earlier this year. This album is a truly dazzling display of Tristen’s songwriting skills and sonic clarity. Scaling back the production, the majority of the album centers around Tristen and her guitar, crafting an intimate window into the mind of this exceptional songwriter. B-Sides spoke with Tristen as she sat in her basement-turned-studio in her Nashville home, where she goes to find inspiration and escape the Tennessee summer heat.

Your new album ‘Aquatic Flowers’ came out just last month, what was the inspiration for that record?

Every song is inspired by a story from someone I know or a reoccurring story in my life. I was actually pregnant when writing most of the songs on ‘Aquatic Flowers’, and was thinking about the kind of stories I would want to tell my son. We wanted most of this album to be just me playing a guitar and singing, with my husband occasionally accompanying me.

Would you describe your songs as confessional?

The act of saying something and wanting to write a song is so cathartic, so when we’re upset about something or brokenhearted, of course we pour it into our work. If you can’t talk about it, you can put it in a song and there’s a therapeutic element to that because you can say what you’ve always wanted to say. To some people that comes across as the sad singer-songwriter trope, you know, the whole “I’m so sad and alone in this room, I’m gonna smoke a joint and write this sad song,” and so-on. I definitely used to write like that when I was younger, I think a lot of people do. There’s something so pure about that way of writing though, it’s less calculated.

Every time I hear a song that describes an artist’s emotional state at such a specific moment in their life, I always imagine what it would be like for that song to become the hit, and now you have to revisit that emotion every show!

Like Alanis Morrissette’s “You Oughta Know”, she has to go back to that feeling all the time. I’ve definitely had that happen to me, even in my own head, where I can go back to a memory and get caught up in all the feelings I was feeling at that time. Music does the same thing, it can overwhelm people with emotion. I think that’s why I see my songwriting as a process of decoding. It’s about how to find those emotions and put them into words.

Were there any songs that were particularly hard for you to “de-code” on the new album?

Well now I’m trying to think about the songs on the album! The thing about songwriting is that it’s never been hard for me, and I know we don’t always like women having that confidence, but that’s just the truth. I’m a big believer in waiting for the good ideas. If it’s not coming to me, I don’t force it. I think it’s actually something we should all practice more; if you aren’t feeling like you have something to say, just be quiet. When I was younger, I felt a lot more pressure to prove myself constantly, whereas now that I’m older I will take weeks to find inspiration. I think that practice of not forcing it has helped me grow as a songwriter.

I really like that, “if you aren’t feeling like you have something to say, just be quiet”. We don’t have to say every little thing we think, it’s about waiting for something worth saying.

I was looking at this list of self-work ’cause I write this advice column, and we were talking about what the self is and what self-work is. One of the items on the list was “be responsible for the energy that you bring to the room,” which is such a simple way to say something that is so hard. I’m a rather anxious person, and I can feel when my anxiety is affecting my son. Children can pick up on all the energy in a room. Until reading that, I had never thought about it that way, and I thought that was such a great way to describe a simple thing that can help so many people with their relationships.

I can definitely tell you have a songwriter’s brain. A lot of the artists I talk to can see a phrase out in the world and it just clicks for them, because it speaks to a larger emotion or experience. I think the power of songwriting really lies in how artists like you can translate those specific moments into emotion.

And sometimes those phrases are there for years. There’s a song on the record called “Wrong With You”. I had that phrase “there’s something wrong with you for loving someone like me” in the back of my head for 10 years. That short phrase just felt like the perfect way to describe something that happens in love all the time.

I saw a Neil Young interview once where he said that no matter where he is or what he’s doing, if a line comes to him, he stops everything and writes it down immediately. That’s so important. When you are gathering ideas like that all day long, and practicing finding inspiration in your daily life, songwriting will come naturally.

Is there an idea you’ve had recently that you’re waiting to write a song about?

Well I’ve had this idea for a song called “Cult Kid”, about someone growing up in a super tight-knit religious cult, where everything you do or even think is about following the rules of the cult or the rules of God. I’m really fascinated by the idea of how someone breaks away from that when it’s all they’ve ever known. I also have a fascination with cults in general.

Well that was going to be my next question, are you into true crime?

I wouldn’t say I’m into true crime generally, but I love watching documentaries about Heaven’s Gate and stuff like that. I’m really interested in the psychology that goes into cults, and how they brainwash people.

I have a friend who grew up in a closely knit parish, and because he is this insanely creative and talented person, they propped him up to be a preacher when he was only 16. But because he was so naturally curious, he ended up reading about a bunch of other religions and decided he wasn’t Christian anymore. Hearing his story definitely sparked an idea for the song, but I also love the way “Cult Kid” sounds, and the idea of writing a story song about someone going through a dramatic change like that.

I definitely understand that fascination. When all you’ve ever known, everyone you’ve ever loved, and everything you’ve been taught centers around this one belief, what kind of person does it take to break out of that?

A really strong one. I’ve also been watching a lot of Handmaid’s Tale, and I think it’s really interesting how the younger handmaids are so much less rebellious because they’ve grown up in a society that brainwashed them so effectively and it’s all they’ve ever known.

It’s always the lonely who get caught up in all of it, which is also something that intrigues me from the songwriting perspective.

I really appreciate you letting us in to that process, hopefully we will get to hear “Cult Kid” one day soon.

Yea, maybe in 10 years you will finally hear it! It’s always hard writing story songs, but I think that’s why I love them so much. Dylan was the best at it.

Is there a song you wish you had written?

There’s so many. Every Dolly Parton song, every Joni Mitchell song, every Bob Dylan song, and so on. There’s so many amazing songwriters out there, and I feel so lucky to be living in a time where we have access to their songs. When I was a kid, you had to go out and buy the whole album, which in some ways was good, but in other ways was limiting.

What was the first record you ever got?

I remember there was a music store called Coconuts in my neighborhood and at Christmas we would get these $10 coins instead of a gift card. The first record I bought with that coin was ‘Immaculate Collection’ by Madonna.

But my family always loved listening to the radio. I would get my cassette tape out and wait for Ben Folds Five to come on so I could record it. The other kids at school and I would make all these tapes and trade with each other.

Exactly! And you just text it!

Playlisting is actually the most fun thing to come out of the annihilation of any kind of income for musicians, I will say.

But I do think that’s why I love my record collection so much, because I only collect things that are really important to me. When you go into Spotify, you can have anything you want, but sometimes it’s like, well what do I want? It feels like swimming in a big ocean, you know?  But you can go back through your record collection and it’s tangible, and you already decided on it when you bought it.

What are you excited for for the rest of this year?

Well I’m really excited to not have a panic attack every time I go out in public. I’m excited to get back to some kind of normal with the pandemic and all.

But I think at the end of the day I’m most excited for my vegetable garden to come in.