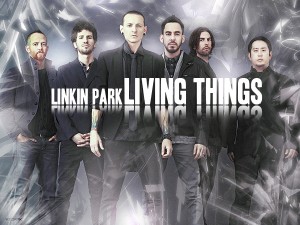 Linkin Park’s new album, “Living Things”, is the band’s fifth studio album, scheduled to be released Tuesday, June 26th, 2012, under Warner Bros. Records, and B-Sides has the scoop. The band has stated that this album is a combination of their musical evolution and “familiar territory”, which seems like an accurate description, though the musical evolution they speak of shouldn’t be considered genre-blowing. “Living Things” is definitely more “Linkin Park” than their last album, the experimental “A Thousand Suns”, released in 2010.

“Living Things” starts off with the song “Lost in the Echo”, which begins with an electronic beat that leads into Mike Shinoda’s classic rock-rap. Soon afterward Shinoda’s rap is traded for Chester Bennington, who sings to us about broken promises punctuated with the angry screaming that defines Linkin Park as a metal-rap group. Lyrically, the theme of broken promises and heartbreak dominate the album, staying in Linkin Park’s comfort zone as lyricists. The lead single, “Burn it Down”, is the third song on the album, and again, not much of a stretch for Linkin Park. It’s somehow generic and a bit boring just because it sounds so much like their other singles. That doesn’t mean you won’t find yourself singing along with the catchy chorus, though.

The only evolution that seems to have taken place is the fact that much of the heavy guitar has been replaced with electronic rhythms and melodies, giving some songs, like “Lies Greed Misery”, an oddly erratic sound that doesn’t quite jive with the Linkin Park we loved to sing along with in the early 2000’s. As the album continues into “Castle of Glass”, we’re met with a softer side of Linkin Park. With lyrics like “I’m only a crack in this castle of glass/Hardly anything there for you to see” against a backdrop of a simple drumbeats, soft electronic sounds, and just a touch of guitar, this may be one of the most “evolved” songs on the album. The album’s last song, “Powerless”, ends “Living Things” on a sad note, singing “And you had it all but you were careless to let if fall”, further solidifying the broken hearted angry theme Linkin Park can’t seem to get away from. All in all, “Living Things” embodies what we already know about Linkin Park with a few stylistic changes thrown in to keep us interested.

Check out “Castle of Glass”