In the era of Nintedo 64 and Playstation 1, there was one king, and one king only of skateboarding. That of course was the Bird man, Tony Hawk. Long before “Skate.” came out, Tony Hawk’s Pro Skater had players shredding skate parks, building massive combos, and there was nothing else like it. Skip forward 8 iterations of the game later, and we arrive at “Tony Hawk’s RIDE”, an ambitious step towards peripheral gaming with an actual board the players could stand on. The game itself was incredibly mediocre and sub par, but I can’t help but admire the ambition set forth with trying to involve an actual skateboard. After the unfortunate commercial and critical demise of RIDE, many feared that the Tony Hawk franchise would be forever lost, in a sea of unwanted skateboard controllers. But those fears can now be put to rest, as the Hawk man is back to his roots, and shredding up classic locations from Tony Hawk Pro Skater 1 and 2 in this recreation “Tony Hawk’s Pro Skater HD” (THPSHD).

Anyone who has played Tony Hawk will almost instantly remember how to play. Nothing has been changed as far as controls go, and all those old lines you remember hitting will still be there. While this might be important for some, at times the controls felt loose and choppy. THPS 1 is over 10 years old now, and the controls feel like it. Animations can vary from smooth and beautiful, to choppy and awkward, which at times is very off putting. Manuals that are used to chain combos can sometimes be dropped for seemingly no reason, as the animation for landing correctly in manual is the same as not landing correctly in manual. It takes some getting used to, but after a few sessions, I was hitting up 200,000 point combos like butter, and that is when the warm, nostalgic feeling of Tony Hawk came to life.

A mix of levels from Tony Hawk 1 and 2 are available, including fan favorites like School II, The Hangar, The Warehouse, and my all time favorite, The Mall. Just like the old games, there are a set of tasks for each level to be completed. In order to unlock new locations, each skater must complete at least 4 of the assigned tasks.  These include things like finding the letters of SKATE, scoring over a certain amount of points, finding  hidden objects, and special tasks that apply only to that level.  There are 7 level’s to unlock in total.

While the controls may have been left unchanged, the graphics have been given a total overhaul. THPSHD looks great, and has transitioned nicely into this generations graphical curve. The detail and polish put in to level’s, shows that new developer Robomodo, truly cares about the franchise and wants to do it justice. They even made secured tracks like Goldfinger’s “Superman”, and Powerman 5000’s “When World’s Collide”, to make sure this truly felt like the old Tony Hawk games. The soundtrack can wear thin rather quickly however, as there are only 14 tracks, and many of them play back to back.

New additions to the game have greatly improved what used to be frustrating. The perfectionists will be pleased as getting to that 100% is now much more clear. A map is now at the ready, showing locations of objectives, collectibles, and a layout of the level. After reaching 100%, new objectives are unlocked, called “Projectives”. These new “projectives” are insanely hard tasks that will challenge even the greatest of Tony Hawk players, and gives the game great replay value.

Online matches is where all of the multiplayer for THPSHD takes place. Most of the nostalgia I personally have wrapped up in this game comes from destroying friends that were sitting right next to me, and the fact that split screen is not an option, left a bittersweet taste in my mouth. That’s not to be said there is no fun to be had, as beating your online buddies in graffiti, trick attack, and new mode Big Head Elimination, is a great time. All of the levels are available to choose from the get go in Multiplayer, and leaderboards for each are there for players to compete against each other. 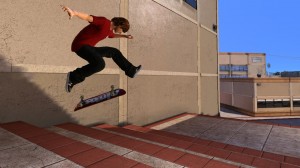 Overall, this game shows that sometimes old can in fact be new. Although the controls feel dated, the feeling of 90’s nostalgia is everywhere, and it is a relief to see the Bird man  return to his roots. Robomodo have done Neversoft justice, and returned the Hawk man to glory. Although not everything we had hoped would be included is, the thought of future levels and modes through DLC already has us excited. Old school Tony Hawk fans rejoice, the Bird Man is back and better than ever.